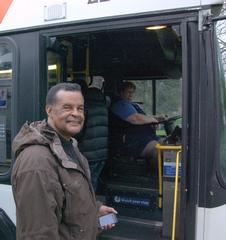 Whether you love or hate them, celebrate them or try to ignore them, the winter and the holiday season is here. It's colder and we're less likely to get outside and move around.

Celebratory foods tend to be extra heavy and everywhere we look sugar and butterfat are front and center.

It's no surprise that we gain weight in the winter. Since it's hard to lose weight once we've gained it, the trick of course is not gain it in the first place. And that likely involves being more careful about what we eat and exercising.

We could (and perhaps should) start jogging, or go to the gym or take more walks. Since it's adding something to an already hectic time of year and it's a bit chilly out, that can be a bit challenging.

For those of us lucky to have a job, we know we have to get to work. And commuting by bus or train is actually a great way to get the exercise we all need.

A study published in the American Journal of Preventive Medicine found that those who rode transit walked an average of 19 minutes per day. If you jump off the bus a stop or two early, you'd likely get the 30 minutes of physical activity recommended by the US Surgeon General.

Not only will it get you active, riding transit can help you lose weight. Researchers studied residents in Charlotte, NC before and after the completion of the Lynx light rail line. Twelve to 18 months later those who commuted by light rail reduced their body mass index compared to those who didn't. For a person 5' 5" it equated with losing 6.45 pounds!

So throw on that scarf and gloves, plan your transit commute trip, and stay healthy!