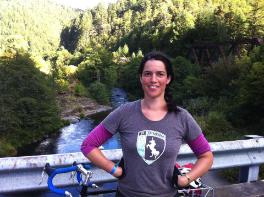 Everyone has her/his own reason for donating to Sunday Parkways.  Michelle Poyourow, one of our long time supporters, shares her story.

"I don't bike the route for Sunday Parkways, not because it's too crowded or slow, but because I love running it.

Running along, I'm going the perfect speed for the crowd - somewhere between the toddler on the scoot-bike and the old guy on the chopper. It's such a pleasure to lose myself in looking at the houses, the people and the gardens. I jog into other people's conversations and out the other sides.

Normally when I run around the city I'm keeping one eye on the curbs as I jump on and off them each block, and another eye on cars coming from all directions. I didn't notice how much work that was until I ran in the street for Sunday Parkways, and felt mysteriously relaxed and happy despite being out-of-breath and tired.

I don't need Sunday Parkways in order to bike in the city. The neighborhood I live in has a good supply of neighborhood greenways, so I get to bike on quiet streets very often. Also, I'm one of those few nervy people who is comfortable biking on busy streets. Yet I see people from my neighborhood out on the Parkways who, unlike me, don't get to bike whenever they want - especially older people and kids. That makes me very happy.

I've gone to Sunday Parkways in East Portland and run the loop there. That is a part of town that doesn't have many neighborhood greenways yet, so I imagine a quiet, safe Sunday Parkways street is even more special to those neighbors. I only wish it lasted for longer than one day!

The truth is that I don't need Sunday Parkways - I can drive to a trail somewhere and go running, and I can bike on my neighborhood greenway.

I give money to support Sunday Parkways because I think it offers something to other Portlanders that I often take for granted. It offers green spaces, clean air, calm streets and a safe place to play. I would wish that for every Portland resident, on every Sunday."

Why do you give to Sunday Parkways?  Every Dollar Counts!