The existing bridge at NE 21st Avenue over the Columbia Slough was built in 1974.  Since that time, continual exposure to environmental conditions has led to deterioration of its timber supports.  The resulting poor condition of the bridge substructure led to the need for a weight restriction which limits the size of trucks that are permitted to cross.  The timber elements have since deteriorated further.  To avoid closing the bridge to all vehicles, replacement of the original supports is required.

The upcoming bridge rehabilitation project will replace all timber components of the bridge with new concrete and steel members.  Additionally, all three spans of the bridge will be tied together for increased seismic performance.

The design was completed early in 2012.  The project was advertised for bid to construction contractors in February of 2012.  The lowest bid for the work was submitted by Legacy Contracting, Inc. which will be performing the bridge rehabilitation. 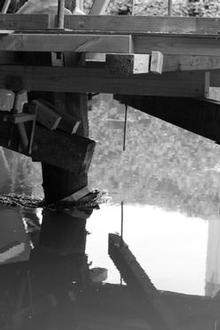 The bridge closure will start on May 29, 2012.  We expect construction to complete and the bridge to be opened to vehicular traffic in the Fall of 2012.

Immediately after the bridge closure begins, the contractor will start by installing a debris containment system to prevent construction debris from entering the Columbia Slough below.  That work will be followed by the installation of the new steel pipe piles to replace the existing timber piles.  After all 24 new piles are installed, the entire bridge will be lifted from the existing timber piles to the new steel ones.  Then the new concrete cap beam will be built in place of the deteriorated timber cap beam to support the bridge loads permanently which will result in the removal of the current weight restriction on heavy trucks.  The final steps involve removal of the existing timber piles and new asphalt paving on top of the bridge deck.

The project is funded by the Portland Bureau of Transportation’s (PBOT) Bridges/Overpasses program.  This dedicated funding source was developed to address the needs of bridges in PBOT’s inventory that require major maintenance, rehabilitation or replacement.

Please contact Portland Bureau of Transportation's construction manager, Cameron Glasgow @ 503 823-9726 with any questions or if you need additional information.