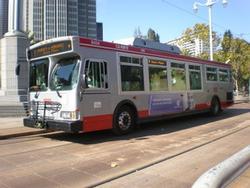 While rail is nearly everyone's transit sweetheart, the humble bus is the workhorse. Moving the majority of US transit passengers and offering service in areas that rail cannot, buses are arguably the foundation of the US transit system.

As the Atlantic Cities blog reports, San Francisco transit authority's experiment with allowing all-door entry for certain passengers (cash-paying and lift passengers still must enter through the front) is being watched by transit authorities around the country. Success attracts imitation, so it things go well in SF, it could have a huge impact on the US transit experience.

The initiative is part of SF MUNI's Transit Effectiveness Project, which strives to improve the system's reliability while providing faster trips. The Atlantic Cities quotes a MUNI spokesperson stating MUNI buses spend an astounding 50% of their time on road stopped to pick up passengers.

While this initiative is cutting edge in the US, it's old hat in Brazil, where the city of Curitiba first introduced prepaid entry decades ago with their Bus Rapid Transit system.

Of course, Murphy's Law would suggest the new policy will be warmly embraced by fare dodgers. Similar to TriMet, the story reports that MUNI has increased their fare inspector ranks and dramatically reduced fare evasion.