Click here for daily results from the bike counter. 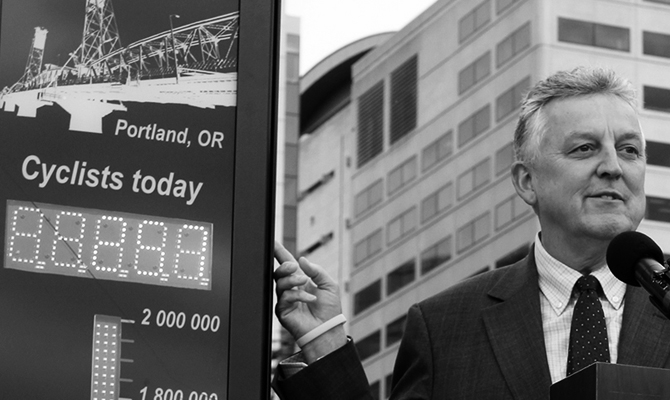 A crowd of people gathered on the Hawthorne Bridge today to see Portland’s first-in-the-U.S. visual bicycle counter start registering each cyclist that passed by in real-time. Cycle Oregon donated the counter at a public event with the Portland Bureau of Transportation and Multnomah County before a long string of cyclists rode by, driving the counts for the day even higher on one of the city’s most popular and visible cycling routes.

“Today is not about getting more people in Spandex shorts. That’s not something any of us wants to see. Today is about getting more people decent paychecks. Rising healthcare costs continue to cripple job creation in our city. We have to find ways for urban dwellers to enjoy more active lifestyles,” said Cycle Oregon Co-founder Jonathan Nicholas. “That’s as simple as giving them more opportunities for safe walking and cycling. By bringing us accurate real-time data, this bike counter will help us better plan the public investments essential to our future as a city that works.”

"I work at the east end of the Hawthorne Bridge and every day see the increasing bike traffic on the bridge. About one in five vehicles crossing the bridge is a bicycle today,” said Multnomah County Commissioner Deborah Kafoury. “This new facility will help us document this trend so we can improve our planning and facilities for bicycle travel in the region."

Portland is a national leader in counting bicycles to determine how many people are cycling and where. In the same way that counting automobiles is the basis for transportation spending and policymaking, counting bicycles informs the Portland Bureau of Transportation about its progress toward making bicycling a fundamental part of life in Portland and gives feedback about the usefulness of its investments in bicycle infrastructure and city streets.

Portland’s visual bike counter – also known as a “bike barometer” – is a tool to collect data on the number of bikes in a location over a period of time and display the data in real-time for the public to see. Bike counters are used in cities worldwide working to raise awareness of the positive impact bicycling has on traffic congestion, air quality and personal health.

The Hawthorne Bridge has one of Portland’s most popular and visual bikeways. Thousands of travelers use the wide sidewalks of the bridge daily to get around town and commute to work, making it an ideal location for displaying the counts and communicating that each cyclist counts and that their numbers are growing.

Increasing the number of people who bicycle is a long-range goal of the city to reduce congestion and air pollution, improve personal health and save Portlanders money by making a low-cost transportation option attractive and safe. A visual bike counter raises public awareness of these goals and highlights the city’s progress in reaching them.

About Cycle Oregon:
In 2011, Cycle Oregon 24 included 2,200 participants from 44 states and 9 foreign countries. Over that time, the Cycle Oregon Fund has dispersed well more than $1 million in grants and has generated millions in benefits for communities throughout the state.

The best way to sum up Cycle Oregon might be through the honorary title riders have bestowed upon it: The Best Bike Ride in America.

That’s because Cycle Oregon delivers the best combination of scenery, challenge, amenities, camaraderie and philanthropy of any ride out there. A fun-loving mix of back-road riding and two-wheeled tent revival, our event moves from town to town with 2,000 or more riders enjoying generous hospitality and providing direct financial benefits to our host towns as well as cycling-related causes throughout Oregon.

About Multnomah County Bridges:
The Multnomah County Bridge Section manages and maintains six Willamette River Bridges and over 20 smaller bridges elsewhere in the County. Our primary goals are to provide safe transportation facilities for the public, to protect the public investment by preserving our historic bridges, and to help plan for the transportation needs of the 500,000 new residents expected in the Portland area by the year 2020.

Originally constructed in 1910, the Hawthorne Bridge is the oldest operating vertical lift bridge in the United States. The 1,383-foot long Hawthorne Bridge is one of Portland’s busiest bridges, safely carrying approximately 30,000 vehicles a hundreds of pedestrians and cyclists across the Willamette River a day.