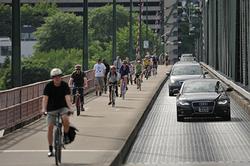 The nonprofit group Cycle Oregon donated the bike counter to the City of Portland. On August 8th, the counter began tracking each bike crossing the sidewalks along the Hawthorne Bridge. By the end of Election Day, the counter had logged 505,393 bike trips across the bridge since the installation.

Increasing the number of people who bicycle is a long-range city goal to reduce congestion and air pollution, improve personal health and save Portlanders money by making a low-cost transportation option attractive and safe. A visual bike counter raises public awareness of these goals and highlights the city’s progress in reaching them.

“Today is about getting more people decent paychecks. Rising healthcare costs continue to cripple job creation in our city. We have to find ways for urban dwellers to enjoy more active lifestyles,” said Cycle Oregon Co-founder Jonathan Nicholas at the opening event on August 8th, 2012.

With the increase in bicycling, more people are using the Hawthorne Bridge to work, shop, and play while the number of cars using the bridge remains relatively constant.

In the same way that counting automobiles is the basis for transportation spending and policymaking, counting bicycles informs the Portland Bureau of Transportation (PBOT) about its progress toward making bicycling a fundamental part of life in Portland and gives feedback about the usefulness of its investments in bicycle infrastructure and city streets.

With the assistance of volunteers PBOT also conducts bicycle counts at over 125 locations throughout the city. The 2011 Bicycle Count Report documented a 6.4% citywide increase in bike trips over 2010.

Portland’s bike counter was the first of its kind in the United States. Since its installation, Seattle has installed a bike counter on its FremontBridge.

how about a contest to guess the day it hits 1 mil?