Nobody benefits from crashes.  Crashes cost Portland over $100 million per year in health care and lost productivity. Forty percent of all traffic congestion in Portland is primarily caused by crashes.  And crashes claim the lives of those we love.

Portland has 1,300 miles of arterials– high volume, high speed, multi-lane roadways. Yet historical crash data tell us that a very small percentage of these arterials account for a majority of all road crashes.  Portland’s arterial network also accounts for 66% of Portland’s pedestrian fatalities and 52% of bike crashes. PBOT refers to these arterials with exceptional concentration of crash activity as High Crash Corridors (HCC).

PBOT’s High Crash Corridor Program uses this crash data to maximize safety improvements with limited resources. The HCC program uses a combination of enforcement, engineering and education.  The red on the map below illustrates crash locations based on Oregon Department of Motor Vehicles data. 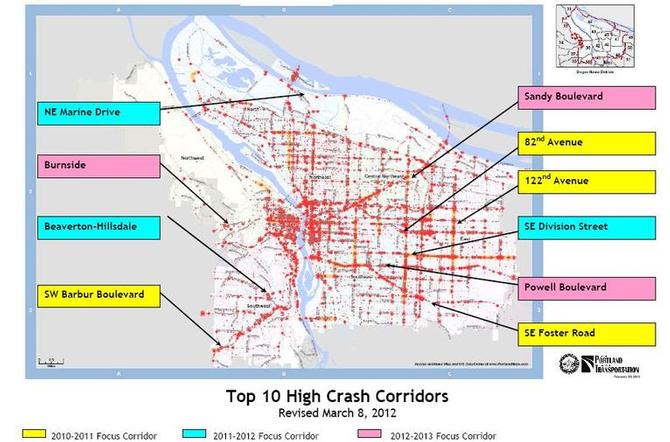 The ten high crash corridors are all arterial roadways which have the highest serious crash rate per road mile and per vehicle mile traveled in the Portland Metro region.  Many of Portland’s busiest bus lines operate on these corridors, which exposes transit riders to risk while walking along and crossing the roadways to access transit.