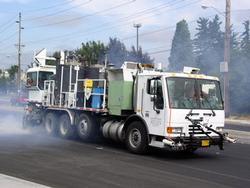 Paint might not be the first word that comes to mind with the Portland Bureau of Transportation (PBOT), yet its streets have enough pavement markings to reach to Omaha, Nebraska. The City’s markings include 4,696 crosswalks, 99 pass-miles* of traffic lane lines, 734 pass-miles of center lines, 2,812 stop bars, 20,018 symbols and words, plus 180 miles of bike lanes.

Given that the scope of resources needed to maintain transportation infrastructure greatly exceeds existing resources, PBOT looks for ways to do more with less. Observing that thermoplastic’s durability drops significantly when used on older roads, in 2012 PBOT’s Maintenance Operations group focused its use of thermoplastic on new roads, high wear locations (such as arterials with sharp curves) and designated Streets of Citywide Significance (SCS).

SCS are travel corridors PBOT prioritizes for expenditures due to their high traffic volume across all modes (freight, transit, motor vehicles, pedestrians and bicycles). Safety is a key element that factors into the SCS designation. The SCS designation includes PBOT’s designated High Crash Corridors.

This prioritization resulted in PBOT using less thermoplastic in 2012 and maintaining more lines with paint.  As a result of the change in the business practice, productivity (defined as pass-miles striped per crew day) increased 70% from two years ago.

*A pass-mile is a continuous 4-inch wide line, one mile in length.

Can you tell me where I can purchase small amounts of Thermo plastic product?

I wish the City of Portland felt that STOP BAR striping pavement markings for a very busy 5-way intersection in Eastmoreland were an important safety improvement. Especially, considering my children almost got hit twice in the intersection. I guess that is what it will take to make our streets safer, blood on the hands of the City.

Instead, Jake Milligan (PBOT Traffic Investigations Sections) had this to say in his report:

"I observed that stopping compliance was low at the setback STOP signs, but vehicles would stop, or nearly stop .... before making movements through the intersection. Most vehicles stopped, or nearly stopped"

"nearly stopped"?? Really, this is an acceptable observation from a traffic safety concern?