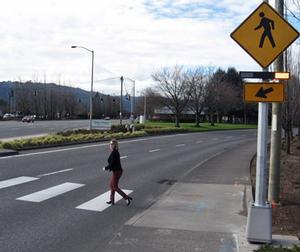 The number of people dying in traffic crashes on Portland streets this year is unacceptable according to Mayor Charlie Hales. In office for less than 80 days, the new mayor was alarmed that there have already been 11 traffic fatalities with five of those 11 involving driving under the influence.

“Every person who dies in a crash represents a family and community tragedy. So far in 2013, we’re averaging about one death a week. That’s unacceptable,” Hales said. “Leadership at the Transportation Bureau, Portland Police Bureau and I are alarmed that five people have lost their lives this year related to driving under the influence. Drive sober to save lives. Doing otherwise is illegal and reckless.”

According to Mothers Against Drunk Driving, citing the National Highway Traffic Safety Administration, every day another 27 people die as a result of drunken driving crashes.

Lieutenant Chris Davis of the Portland Police Traffic Division said, “As we travel, the choices we make can significantly reduce the chances that tragedy will strike. None of us leave the house planning to be involved in a traffic crash. But, we all can slow down, stay sober and follow the rules of the road. Our officers have been way too busy this year and the Portland Police Traffic Division is asking all Portlanders to recommit to travel safely no matter if you are walking, bicycle riding or driving.”

“The Transportation Bureau is working diligently to make streets safer for everyone and raising awareness that drunk and distracted driving is a killer. We’re fortunate to have the men and women of the Portland Police Bureau and Mayor Hales committed to traffic safety as well,” Transportation Director John Widmer said.

In addition to talking about traffic fatalities, the Transportation Bureau and Police Bureau held three community meetings in the last month to get input on improving traffic safety. Meetings were held to make Northeast Sandy Boulevard, Burnside Street on both sides of the river and Northeast Glisan Street safer places for people to walk, bike, use transit and drive.

An additional meeting is scheduled for April 8 with the Powellhurst-Gilbert Neighborhood Association, the location of another pedestrian fatality in 2013.

Burnside and Sandy are two of the 10 streets the bureau calls “High Crash Corridors.” Glisan Street was the location of the first pedestrian fatality of 2013. The High Crash Corridor program’s goal is to reduce the number of traffic fatalities and injuries where they are most prevalent.

Findings from the “Metro State of Safety Report” issued in April 2012 focused on major streets and high numbers of crashes. The report said arterial roadways comprise 59 percent of the region’s serious crashes, 67 percent of the serious pedestrian crashes and 52 percent of the serious bike crashes, while accounting for 40 percent of vehicle miles travel. That is why the City focuses safety funding toward these corridors through education, enforcement and engineering activities.

The report also said alcohol or drugs were a factor in 57 percent of fatal crashes.

The Portland Police Bureau partnered with transportation on these efforts, particularly through enforcement actions designed to educate drivers and pedestrians of crosswalk laws and cite those who break them. On January 23, police cited 12 people and warned two others for traffic safety violations at a crosswalk on Northeast Sandy Boulevard at Northeast 85th Avenue. And on February 26, police issued 27 citations in 90 minutes on at a crosswalk on West Burnside Street at Northwest 21st Place.