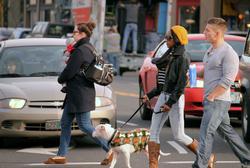 Attendees at the February 27 open house expressed interest in pedestrian safety improvements on the Burnside corridor to reduce vehicle speeds (both enforcing the existing speed limit and reducing the posted speed limit) and enhance pedestrian crossings.

Participants also suggested other solutions to improving the pedestrian experience on inner W. Burnside St., such as using bollards, trees or other physical barriers to provide a buffer for pedestrians from auto traffic. Finally, there was strong interest in forming a community group to give feedback on near- and long-term corridor safety improvements.

The March 6th open house included attendees from throughout the Sandy Blvd. corridor. Participants expressed interest in a broad range of issues, including traffic flow, enhanced pedestrian crossings, and improved conditions for people riding bikes. A desire to educate drivers about Oregon Crosswalk Laws was also highlighted. Next steps will include developing a community group for the East/West Burnside St. corridor, performing a data analysis, and developing a guide for near- and long-term safety improvements along both corridors.

It is obvious that anyone supporting changing E. Burnside street to a two lane street either never uses the street or rides a bicycle and never pays any hyway use fees.

If you want to slow traffic from 35 to 30 then just do it.
It's not necssary to tear up the street and interrupt business' just to slow trafiic.
It will be a waste of gas in idelling when traffic gets backed up.
When I-84 gets plugged traffic is diverted to
E.Burnside and can easily get backed up two blocks. Can you imagine how plugged up it will get with a single lane of traffic.

Guarantee,none of you people ever drive NE Glisen,
SE Foster or NE sandy from 122 out during rush hour traffic because if you did this would be a none issue.

Sincerly a pissed off tax payer.

The E Burnside (14th-32nd Ave) Transportation Safety Project will maintain two outbound (eastbound) travel lanes and convert one of the two inbound (westbound) travel lanes to a two-way center turn lane. The purpose of the project is to address the safety challenges on this segment of East Burnside by developing a design that: reduces crashes, reduces speeds, improves pedestrian crossings and access to transit and supports the developing business district. PBOT expects to achieve about a 30% reduction in overall crashes and a 40% reduction in pedestrian crashes at intersections where marked crosswalks and pedestrian islands are built. Travel times are expected to remain the same at all times except during one hour of the peak AM commute when about one minute will be added to current westbound travel times from E 32nd to E 14th. For more information, please visit the project website at http://www.portlandoregon.gov/transportation/61206.

Note: Comments have been disabled on this blog post.