After two well-attended public meetings, the Portland Bureau of Transportation (PBOT) will be moving forward on traffic safety improvements on NE Glisan Street between 60th and 82nd Avenues.

In response to these tragic crashes, nearby residents, businesses, churches, schools, and the Montavilla Neighborhood Association asked the City to improve safety on the street. PBOT and the Portland Police Bureau assembled a team to investigate the most recent crash and to identify potential changes that could make NE Glisan safer.

With support from the Portland Police Bureau, PBOT led a public meeting on February 25th, 2013 to discuss potential safety improvements on NE Glisan. Those present expressed significant concern about safety on NE Glisan, including concerns about speeding and the safety of pedestrians crossing the street. Many voiced specific concerns regarding the crossing at 78th Avenue. PBOT’s February 25th presentation can be found here.

The second public meeting on April 22, 2013 focused on strategies to improve safety on NE Glisan between NE 60th and 82nd Avenues. More than 4,000+ residents near the project area were notified. Staff from the Bureau of Transportation shared data about traffic flow, parking demand, and pedestrian travel in the corridor at the meeting. 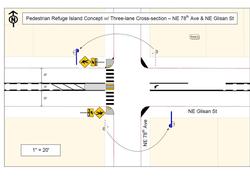 Within the project area, PBOT proposed changing NE Glisan to a 3-lane roadway with a travel lane in each direction and a center turn lane. Current pro-time parking (no parking during the peak hours) on NE Glisan would become full time parking.  Finally, Transportation staff proposed a crossing improvement at NE Glisan and 78th including a pedestrian refuge island and a Rapid Flash Beacon.

There was overwhelming consensus from those present that the project move forward as proposed. Pending approval of this year’s budget, the NE Glisan Safety Project is now slated for late summer/early fall 2013construction.

If you have questions about this project, please contact Gabriel Graff at (503) 823-5291 or gabriel.graff@portlandoregon.gov.