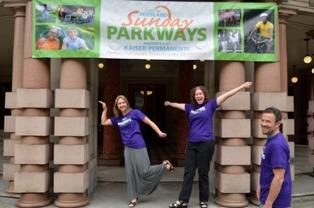 This May Portland Sunday Parkways will be hosting its 20th event.  We started in 2008 with 15,000 people enjoying a six mile route through North Portland.  In 2009, we expanded with three events in North, Northeast and Southeast Portland.  We had a total of 62,000 people walking, biking, running and rolling around a total of 22.1 miles of traffic-free streets.  Starting in 2010, we grew to five events in North, Northeast, Southeast, Northwest/Downtown and East Portland.  Can you believe it - 91,000 people made their way around a total of 29.3 miles.  In 2011, we saw a huge jump in participation with 107,200 people being active in parks and around 35.6 miles.  And last year, we jumped to a total of 41.3 miles - moving our Northwest/Downtown route over to Southwest Portland and adding a walk-only route.  We had 103,350 people get out and enjoy the five events.

This year we again have five events and look forward to growing the number of people who come out and enjoy their streets and parks.  Hope to see you out this weekend in East Portland.