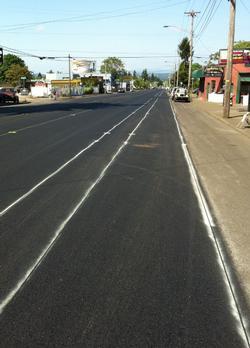 As part of the repaving, the existing bike lanes from NE Prescott to Failing Streets will be restriped with a 3’ buffer. Together with the existing cycletrack north of Prescott St., completed as part of the Cully Green Street Project, the buffered bike lane will provide people riding bicycles with nearly one mile of separated bikeway.

Buffered Bicycle Lane design provides a more protected and comfortable space for cyclists than a conventional bike lane. Cully Boulevard’s 66’ right of way allowed PBOT to add the 3’ buffers without reducing access or the number of vehicle lanes. The road’s pre-existing 15’ center turn lane was reduced to 10’ and the two travel lanes to 11’.

The bike lane piece of the repaving project is funded through the Missing Links program, which uses opportunities to efficiently develop city bikeways in conjunction with other projects, particularly working with regularly scheduled pavement overlays. Between 2000 and 2007 the Missing Links program built 41 miles of city bikeways and added countless improvements to the bikeway network.  The cost for enhancing the Cully Boulevard bike lanes is approximately $4,000.

The project will be completed during National Bike Week, May 13 - 17.