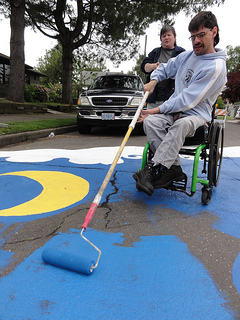 Memorial Day weekend marked  the beginning of the 13th annual Village Building Convergence (VBC), a ten-day placemaking event where neighbors and volunteers come together to improve their neighborhoods through grass-roots public art activities.

A product of the Portland nonprofit City Repair, the VBC is perhaps best known for its Intersection Repair projects: community-building events where neighbors and volunteer artists design and paint an intersection of a local street. Portlanders have beautified dozens of intersections since the first project was installed 17 years ago.

This year’s VBC will include seven Intersection Repair projects. The Portland Bureau of Transportation is one of many sponsors of the event. PBOT supports neighborhood volunteers by facilitating the permit process, ensuring community feedback on the proposed projects, and vetting the designs for safety.

Among this year’s projects is an Intersection Repair at NE 6th Avenue and Going Street, a partnership between residents at McCoy Village, Catholic Charities, the Northeast Coalition of Neighbors and EnviroVillage, an organization dedicated to environmental education and community involvement.

To both engage neighbors in art and explore an Intersection Repair project, EnviroVillage held five art workshops at McCoy Village, an adjacent housing community owned and managed by Catholic Charities.  Eleven youth and four adults from the neighborhood participated in the workshops.  Local artist  Molly LeLoup Dougherty then created a unified design for the intersection that includes an element from each workshop participant. The workshops included site visits and observing the local conditions, which on Going includes a lot of pedestrian and bicycle traffic. 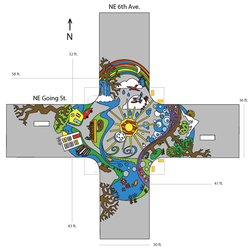 PBOT requires that each project solicit feedback from neighbors within two blocks of the project. Eighty percent of these neighbors must approve of the project as well as 100% of those on properties adjacent to the project.

While instituted to ensure a basic level of neighborhood involvement, the requirement is one of many aspects of VBC that engenders new neighborhood connections.  Youth went door-to-door to seek approval from their neighbors. “We have youth from a large multifamily community interacting with neighbors a block away that they had never met,” said EnviroVillage’s Director Kirstin Walter.

While PBOT permits Intersection Repair projects only on local neighborhood streets with no more than 2500 motorized vehicles a day, the NE Going / 6th project will take place on one of Portland’s Neighborhood Greenways. In the 2012 PBOT bicycle count, approximately 1700 bicycles a day were counted.

The project’s street painting is scheduled for Saturday, June 22 from 10 am to 6 pm. In case of rain, the backup date is Saturday, June 29. “We hope to see not only neighbors joining us, but also some of the thousands of pedestrians and bicyclists that use Going every day,” said Walter.