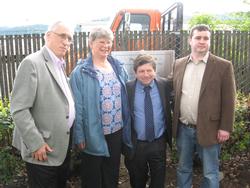 In 1998, Captain Richard Head of Bristol, England had brought his ship to dock for repairs on Portland’s Swan Island. While walking back on North Channel Avenue from dinner with his wife, Captain Head was tragically struck and killed by a vehicle.

On May 30th, the family of Captain Head joined the Swan Island Business Association (SIBA), staff of Mayor Charlie Hales, Transportation Commissioner Steve Novick, Swan Island business representatives, and City of Portland and Port of Portland staff to celebrate transportation and safety enhancements on Swan Island.  Improvements on Channel Avenue include the extension of the sidewalk on N Channel Avenue, the unveiling of a plaque honoring Captain Head, and street sign toppers identifying the area as The Captain’s Walk. Captain Head’s wife, Diana Elaine Head and nephew, Christopher Head of Bristol, England were joined at the event by Captain Head’s brother, John Head. “The main thing I want to express to you today is gratitude,” said John. “Richard had a deep sense gratitude for the work of others who helped keep his ship operating at sea. And as his family, we want to extend our deep thanks and gratitude for the work you all have done to honor his memory and make this street safer for others.”

Partnership played a key role in moving the project forward. The Swan Island TMA took the lead in the design, fabrication and installation of the plaque honoring Captain Head. The Port of Portland assisted with the plaque installation and is hosting it on their property adjacent to the sidewalk. Vigor Industrial donated survey work to help with the sidewalk design and installation.  PBOT designed and installed the new sidewalk and added an additional street sign at the beginning of the new sidewalk. The Bureau of Environmental Services is assisting with the installation of sustainable stormwater facilities on the Island.

All these improvements were part of the Portland Bureau of Transportation’s Going to the River project, funded through the Oregon Department of Transportation’s Flexible Funds program. In addition, the Bureau of Environmental Services provided funding to support sustainable stormwater solutions at sites within the project. Going to the River bundled investments in bicycle, pedestrian, transit and transportation demand management to optimize access to and from Swan Island, one of the state’s largest employment centers.