(PORTLAND, Ore.) – A bicycle lane will expand and freight access will improve on the Broadway Bridge ramp into Old Town, with construction crews scheduled to make these and other safety improvements beginning on Monday, July 1, Transportation Commissioner Steve Novick announced today.

“We’re pleased to announce this all around win.  By restriping and transforming the lanes, which is a low-cost action, the City is improving the traffic flow and safety for all,” Novick said. He noted that the ramp is a commuting g 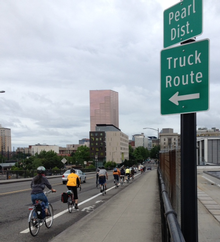 “This is an elegant solution to a longstanding safety problem,” said Lanny Gower, who commutes by bicycle to his work at Con-Way Freight and is a member of the Oregon Trucking Association’s policy committee and Bicycle Transportation Alliance board. “The city is cleaning up a bottleneck for people driving and bicycling.  Safety will improve, especially for people turning right from the foot of the bridge, and so will traffic flow for all commuters.”

In addition to the restriping, the City will change parking rules along the corridor later this summer to better accommodate morning commuters.   Parking will be allowed along the southbound lanes between NW Glisan and W Burnside streets beginning at 9 a.m. instead of 7 a.m., after the city determined that parking demand is light at those hours, and the change can accommodate bicycle traffic without compromising parking needs for people and businesses.

The NW Broadway ramp project was identified in the Pearl District Access and Circulation Plan, adopted by City Council on June 13, 2012.  The Portland Bicycle Plan for 2030 recognized its importance in the city’s network by giving it the highest bicycle functional classification.