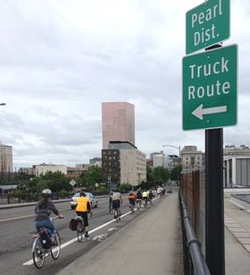 Freight access will improve and a bicycle lane will widen on the Broadway Bridge ramp into Old Town, with construction crews scheduled to make these and other safety improvements beginning on Monday, July 1,  Transportation Commissioner Steve Novick announced today.

“We’re pleased to announce this all-around win.  By restriping and transforming the lanes, which is a low-cost action, the City is improving the traffic flow and safety for all,” Novick said. He noted that the ramp is a commuting gateway into the central city for people traveling by bicycle and motor vehicle and also a designated truck route heavily used by U.S. Postal Service trucks turning into the adjacent postal service Portland headquarters.

“This is an elegant solution to a longstanding safety problem,” said Lanny Gower, who commutes by bicycle to his work at Con-Way Freight and is a member of the Oregon Trucking Association’s policy committee and Bicycle Transportation Alliance board.  “The city is cleaning up a bottleneck for people driving and bicycling.  Safety will improve, especially for people turning right from the foot of the bridge, and so will traffic flow for all commuters.”