(Portland,OR) - In an effort to prevent additional suicides from the iconicVistaBridge, City Commissioner Steve Novick today announced that he is ordering the immediate construction of a 9-foot-tall mesh screen on the historic span, an interim remedy that can be in place until a longer term solution and funding can be found.

“Unfortunately, this beautiful and elegant bridge has been known as Suicide Bridge since its construction in the 1920s.” said Novick, who oversees The City of Portland Bureau of Transportation. “It is time – past time – to stop the dying.”

Under City Code, a commissioner can declare an emergency when the public’s safety is endangered, a move that allows immediate action. Novick noted that in the first six months of this year, three people, including a 15-year-old girl, have jumped to their deaths from the bridge, matching the highest rate from any recent year, and that this record has created a substantial threat to the welfare and safety of the public above and below the bridge. 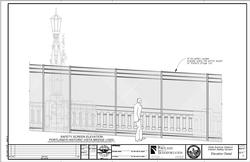 Construction of the screen mesh fence will begin in mid-July and take approximately two weeks at a cost of about $236,000. To deter climbing, the barrier is designed with a tight weave and a curved overhang. It will be installed along the inside of the railing and can be removed at any time with no permanent impact on the structure, in keeping with the bridge’s designation as a National Historic Landmark.

Tapani Inc, a company with expertise in bridgework and historic structures, including its recent work on the Vista House in the Columbia River Gorge, has been tapped to install the fence.  The bridge will remain open during the installation, with crews narrowing the extra-wide lanes to create a construction zone and allow normal traffic flow in both directions.  One sidewalk will remain open at all times.

For the long term, the City will continue to work with the State Historic Preservation Office on a solution that meets historic design guidelines and seek federal or other funding for the estimated $2.5 million to $3 million cost of a durable structure that would be consistent with the historic character of the bridge, a process that is expected to take two years or longer.

Novick thanked Kenneth and Bonnie Kahn “for their tireless advocacy for suicide barriers on the bridge,” and thanked David Stabler, reporter for The Oregonian for his February article: “Vista Bridge: Is it time to stop the dying on Portland’s iconic bridge?”

“Mr. Stabler’s article highlighted the devastation caused to victims’ families and even witnesses by suicides from the bridge, and presented strong evidence that barriers are effective in preventing suicides,” Novick said. “It was an example of how good journalism can drive public policy.”

Novick also thanked David O’Longaigh, the City’s senior bridge engineer, for his efforts to identify a temporary solution that would blend in with the existing bridge as much as possible, and could be easily removed once funding for a permanent solution is found.

“In addition to that, David himself helped convince me to make this decision,” Novick said. “David is responsible for all the bridges in the city. They are in his care. I asked him if he thought we should take this step. He said that he had come to the conclusion that the bridge has become a curse upon the City, and it is time to lift the curse.”

“We cannot bring back any of the people who have jumped from the Vista Bridge,” Novick concluded. “But we can take this step to avoid further suffering.”