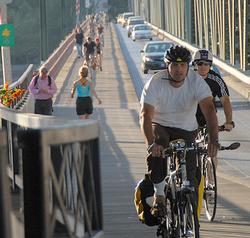 July 25, 2013 - People bicycling over the Hawthorne Bridge are pedaling towards a symbolic milestone: the millionth bicycle trip over the bridge in 2013.

The electronic Hawthorne Bicycle Bridge Counter, installed last August 8, is expected to count the one-millionth bridge-crossing trip of 2013 at or before its one year anniversary.

*** July 30 Update:  Today, the bicycle counter registered the one-millionth trip of 2013. Keep pedaling Portlanders and thanks for the celebration ***

To celebrate, the City of Portland will join community volunteers from Shift for a special Breakfast on the Bridge event on Friday, July 26. Between 8 a.m. and 9 a.m. people traveling over the bridge can enjoy millionth-trip themed doughnuts and can take and share photos by the electronic bicycle counter next to a “One Million + Me” sign.

Anyone who has crossed the bridge by bicycle, skateboard or other non-motorized method is encouraged to share their role in reaching the million-trip milestone on social media with the #MillionBikes hashtag.

“One million is a nice round number people can be proud of. That’s one million ways people are improving their health, lowering costs and decreasing traffic congestion, all while having fun commuting and getting around,” said Commissioner Steve Novick, who oversees the Bureau of Transportation. “Plus, it’s only the middle of the year with lots more pedal strokes ahead of us. Keep going Portlanders.” 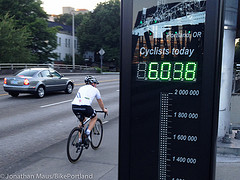 As fun as Friday’s celebration is expected to be, the electronic bicycle counter has a serious purpose, giving transportation planners a useful tool to collect data, track bicycle use and plan transportation improvements and public investments for all modes of transportation.

Increasing the number of people who bicycle is a long-range goal of the city in order to reduce congestion and air pollution, address climate change, improve personal health and save Portlanders money by making a low-cost transportation option attractive and safe. A visual bike counter raises public awareness of these goals and highlights the city’s progress in reaching them.

In the same way that counting automobiles is the basis for transportation spending and policymaking, counting bicycles also informs the Transportation Bureau about its progress toward making bicycling a fundamental part of life in Portland while giving feedback about the usefulness of its investments in bicycle infrastructure and city streets.

Bicycle use over the five central city bridges has steadily risen with increased bicycle infrastructure. Ridership citywide has grown 211% since 2000, according to the Transportation Bureau’s 2012 Portland Bicycle Count Report. Ridership over the Hawthorne Bridge rose dramatically after the county widened the bike and pedestrian path in 1999.

Now, thousands of travelers use the wide sidewalks of the bridge daily to get around town and commute to work. The actual daily and weekly counts can be found at the city’s Hawthorne Bridge Bicycle Count page.

See the photo album from the event: Click here.