(Aug. 21, 2013) –  Meeting with work crews applying a fog seal coating on a Northeast Portland neighborhood street, Commissioner Steve Novick and Portland Bureau of Transportation Director Leah Treat today announced that the city is well on its way towards meeting the Mayor’s goal of restoring and paving 100 miles of city streets this fiscal year. 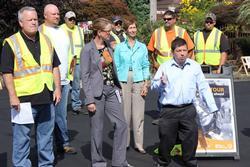 Since the start of the fiscal year on July 1, city crews have restored 24.5 miles of streets using fog sealant, a cost-saving technique that the city began using this year on less trafficked neighborhood streets to extend their life and prevent higher cost repairs in the long run. In addition to fog sealing, 10.5 miles have been paved since July 1, many of those on arterial streets that carry higher traffic loads.

“Our crews are on a roll,” said Treat, who began her tenure on July 22 after leadership roles in Washington D.C. and Chicago transportation departments. “The Transportation Bureau is working hard to create a new local street maintenance program that is cost effective and restores badly needed services to neighborhood streets.”

Fog sealing is a blend of liquid asphalt, recycled rubber tires and grit that can be spray applied to streets but that requires people to stay off the newly treated pavement for up to eight hours.  Treat and Commissioner Novick on Thursday highlighted that work on NE 12th Avenue and Skidmore Street.

The fog seal initiative comes after the City Council in May restored authority to the Transportation Bureau to maintain neighborhood streets, a program that had been eliminated in 2009 for budgetary reasons but that left residential streets without any preventive maintenance. 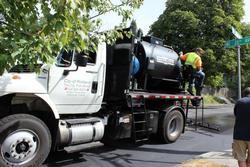 “For too long, the City of Portland waited until our streets were broken down before fixing them. That’s short sighted,” Commissioner Novick said. “Our Back to Basics street maintenance program is changing that. The Mayor and I have set a goal of 100 lane miles of preventive maintenance by the end of June, 2014.  Crews are well on their way to accomplishing, if not exceeding, that goal.”

“If you clean your teeth regularly, it’s less expensive than having a root canal every six months,” Novick added. “It works the same way for our streets.”

Using fog seal for preventive maintenance on local streets that are in fairly good shape costs $7,500 a lane mile.  On streets in worse shape and that handle higher traffic such as arterial streets, grinding and paving is more appropriate and costs about $150,000 per lane mile.

A lane mile is the equivalent of one 12-foot wide lane, one mile long.

Both techniques will prevent potholes and also prevent deterioration to the point where a street needs to be completely rebuilt, a hefty cost proposition at up to $3 million per lane mile.

Both fog sealing and paving require dry conditions. City crews will continue restoring streets as long as the weather holds this summer season and next year to reach and exceed the 100 mile maintenance goal by the end of the fiscal year, June 30, 2014.

For more information on where the city's street maintenance crews plan to work and where they have recently completed work, see the Back to Basics project web page.