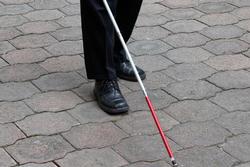 The first of state laws regarding the right of blind people to travel independently with the white cane was passed in 1930. It granted blind pedestrians protection and the right-of-way while carrying a white cane.

Portland is home to more than 12,200 people who are blind or vision impaired, according to the 2012 U.S. Census Bureau’s American Community Survey. In recognition of White Cane Safety Day, the Transportation Bureau reminds all drivers to be aware of pedestrians in the crossing and knowledgeable of the specific laws related to visually-impaired pedestrians.Oregon law says that:

“A driver approaching a pedestrian who is blind or blind and deaf, who is carrying a white cane or accompanied by a dog guide, and who is crossing or about to cross a roadway, shall stop and remain stopped until the pedestrian has crossed the roadway,” according to crosswalk law (ORS 811.035).

In observance of White Cane Safety Day, the Portland Bureau of Transportation and Portland Police Bureau will hold a crosswalk enforcement action on SW Capitol Highway at SW 26th Avenue, from 2:30 to 4:00pm on Tuesday, October 15.