Donna has been employed by the City of Portland since 1990 and has worked to encourage safe walking in various capacities; first as a project manager in the Traffic Calming Program, and next in the Transportation Options Division (now Active Transportation Division), where she worked with the visually impaired community to install accessible pedestrian signals and participated in a pilot project for curb ramp detectable warnings. With the advent of the SmartTrips Program, Donna created and was fortunate enough to lead the Senior Strolls program from 2005 – 2013, wrapping up the program’s final year in early October. 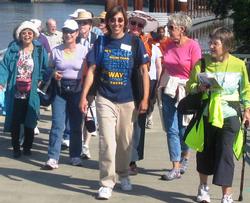 During her tenure with Senior Strolls, Donna found that in addition to the many health benefits her walkers enjoyed from the strolls, participants often reporting giving up short driving trips for walking trips and gained a newfound appreciation of the many great neighborhoods and places to walk in Portland. They also had the added benefit of learning how to navigate around the City using TriMet as all of Donna’s strolls started and ended near TriMet stops. Her efforts have helped many people discover the benefits of walking as a means of transportation.

Oregon Walks is a non-profit advocacy organization dedicated to promoting walking and making the conditions for walking safe, convenient and attractive for everyone.

The Weston Awards celebrate inspiration, enthusiasm, perseverance and the conviction that one of the best ways to get anywhere is on foot. According to Oregon Walks, the Weston Awards are named in honor of America’s greatest walker, Edward P. Weston. In just 10 days in 1861, Weston walked from Boston to DC to attend Lincoln’s Inaugural Ball. His journey took him to cities big and small, neighborhoods poor and rich, through a cross section of America, where he was welcomed at every turn.