(November 14, 2013) -  The Portland Bureau of Transportation is expanding its popular Street Seats program, and is seeking proposals through March 1, 2014 for a maximum of ten new locations citywide.

Now in its third year, Street Seats allows businesses or non-profit organizations to convert on-street parking into other public uses, such as café seating or a mini-park.  Based on similar programs in San Francisco and New York City, the program enlivens the streetscape by creating spaces for Portlanders to enjoy seating and a meal or a drink outdoors, which in turn enhances street vitality and benefits local businesses. 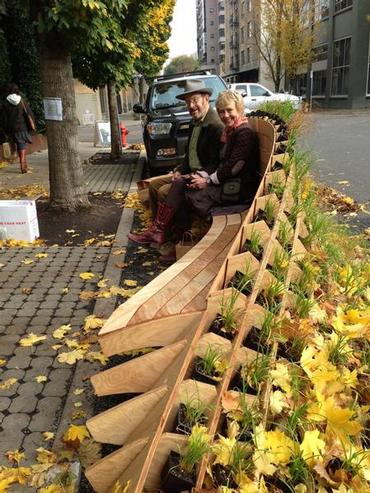 The Portland Bureau of Transportation experimented with a pilot Street Seats project in 2012 and instituted an ongoing program in spring 2013.

Today, Portland has eight Street Seat installations, seven of which were organized by restaurants to offer outdoor café seating.  One installation has been designed solely for open public seating and is located at the Center for Architecture at NW Flanders and NW 11th Avenue.

While encouraging additional restaurant and café proposals, the Transportation Bureau will prioritize design proposals that are open to full public use, such as the NW Flanders installation.

Proposals may be seasonal or year-round, and may be located in any part of the city, except the downtown core from West Burnside to SW Harrison Street, and SW Second to 10th avenues.

View Street Seats photos from Portland and elsewhere on Flickr.