(November 22, 2013) - The Portland Bureau of Transportation is offering the news media an opportunity tonight to see its newest street sweeper in action – a machine that is small and narrow enough to fit bicycle lanes and other hard to reach places in addition to performing regular duty as part of the city’s fleet of larger sweepers.

A city crew will clean the protected bikeway along NE Multnomah Street.  Typically, city crews sweep major commercial streets at night when traffic is light and there are few parked cars.  The crew will sweep from NE Grand Avenue to 21st Avenue from 9 p.m. to midnight.

The news media is welcome to film or photograph the sweeper in action. Any interview requests should be directed to Diane Dulken, public information officer at 503.577.8236 before 10 p.m.

WHERE: The street sweeper will begin its NE Multnomah Street route at NE Grand Avenue and sweep east to NE 21st Avenue then turn around and return to Grand Avenue.  The protected bikeway, a lane that is buffered from auto traffic by planters and parked cars, extends to 16th Avenue.  A traditional bikeway extends to 21st Avenue.

WHO: The Ravo Street Sweeper, small enough to fit into bike lanes, in addition to regular street sweeping duty 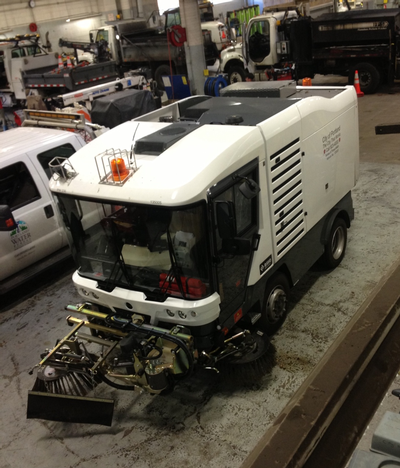