(December 10, 2013) –  Leaf Day service continues through this month’s cold snap as  Portland Bureau of Transportation Leaf Day crews adjust schedules and techniques to adapt to subfreezing temperatures that have left some leaves bonded to the pavement.

Despite December’s cold temperatures, the six-week leaf pickup service will be extended by only one day, to December 17th.   Crews that day will serve a portion of the University Park neighborhood in North Portland, or N2 on the Leaf Day map.  It is the only neighborhood whose service needed to be rescheduled completely.

In addition, crews are taking a one-two approach to leaf removal in frigid conditions. They are removing the bulk of leaves as scheduled, but will need to return to some areas at a later date when temperatures rise. They can then finish the job of removing debris that now is frozen to the ground.

Typically, two different crews serve each district on the same day.  The first crew pushes leaves into giant piles and then loads them into trucks to be composted.  A second crew flushes the street with water and sweeps remaining leaves from curb to curb, thoroughly cleaning city streets.

But with below-freezing temperatures, crews are unable to apply water to the streets without turning them into hazardous icy s 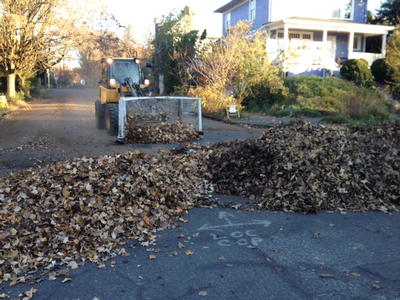 “We can’t control the weather but we can adapt to continue needed services and keep streets as clear and safe as possible,” said Suzanne Kahn, Transportation Bureau manager in charge of maintenance and operations. “By dividing the job into two parts, we are removing the bulk of leaves as scheduled and will then provide a cleaning when it is safe and effective.”

Areas where crews have removed leaves but will return at a later date, at no additional charge are:

* Northwest Portland (NW1) – Between W. Burnside and NW Marshall streets,  and west of I to NW 21st  Avenue.

City crews have nine remaining leaf districts that they are being served through December 17th.  They will determine, as needed, which areas may require return service.  Residents of each area will receive a letter informing them of the return service The regular schedule may be found at: http://www.portlandoregon.gov/transportation/article/363503

What happens to leaves that are picked up? They are turned to compost for sale to the public.  So far, transportation crews have removed 12,172 cubic yards of leaves, or the equivalent of 1,000 dump truck loads, that are now being composted at the City’s Sunderland Recycling Facility inNE Portland.

About Leaf Day: From early November to mid-December, removing leaves from our streets is critical because letting them stay on the street can clog storm drains, flood intersections and make streets slippery.  Leaf  Day service is provided to 30 designated leaf removal districts in neighborhoods whose high concentration of mature street trees need a higher level of service than the city’s regular street cleaning operation can provide to keep streets clear and safe.   Residents in those districts have received letters and brochures notifying them of the service, which typically costs $15 for one service and $30 for two.