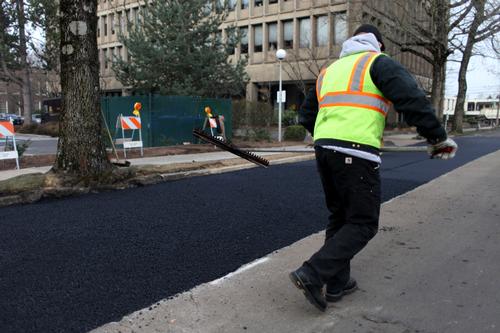 Despite freezing temperatures this week, PBOT crews work to repave a section of road in Northeast Portland.

“I put on my wrong boots,” said Jason Lemke, a construction equipment operator with the Portland Bureau of Transportation.

Lemke had woken up to a thin layer of white spread out across the streets Tuesday. But, as it happened, he wouldn’t spend his morning dealing with any of it. Instead, he was running a roller over hot asphalt as a crew repaired a 675 square-foot area of road on NE 16th Avenue just south of NE Irving Street.

A tree’s roots had worked its way through the sidewalk and into the road. “It looked like something out of Dr. Seuss,” said William Clark, a PBOT public works supervisor.

The temperature was around freezing and had created its own set of minor hiccups, but, all in all, work was proceeding as usual.

The Bureau had been prepared for a much different story. Between Friday and Sunday, crews had put 3,450 gallons of deicer on city roads. Then, between 10 p.m. Monday and 6 a.m. Tuesday, they put down another 3,750 gallons. Additional crews were ready in the early morning (as in 4 a.m.) to start clearing roads.

In the end, though, not a single snowplow was needed. 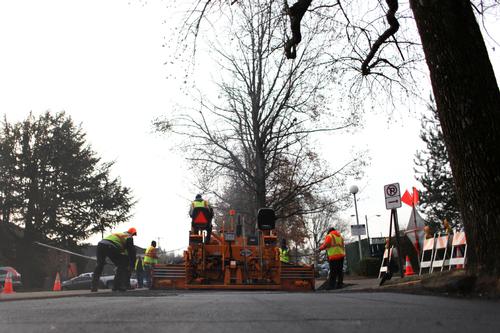 A section of road and sidewalk had to be replaced after a trees roots had grown too large.

PBOT employees who were watching weather conditions early Tuesday morning said little snow fell and what did had a relatively low moisture content so it generally evaporated quickly.

“It’s kinda funny doing it on a cold day like this,” Lemke said about the base repair project on NE 16th Avenue.

The cold weather meant Lemke had to “roll a little different” over the steaming new asphalt to account for the frozen ground below -- all told they’d run through about 45 tons -- but he seemed unfazed. Base repair jobs, for the uninitiated, are focused on spots that are or could become safety hazards.

After he was done checking in at that location, Clark, the supervisor, took a drive out to a home near the foot of Rocky Butte. A water main had broken, leaving the road pockmarked. A temporary layer of asphalt has been laid out, but road crews would have to come replace the whole area.

Generally, Clark goes out first to get a sense of the job and draw out a quick map. He also has to set some guidelines on the road in white spray paint. But after he shook one of the canisters and started drawing on the street, the paint started sputtering.

He went back to his truck for another can and shook it hard. Nothing.

“Paint’s frozen,” Clark said. He grinned slightly. “Never had that happen before.” 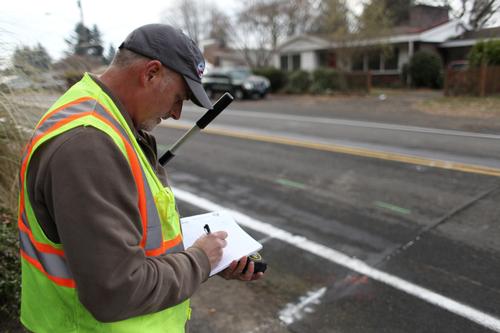