Angie Egan, accompanied by her three children, became the 10 millionth person to ride the tram at 10:30 a.m., Wednesday, Jan. 8, 2014.  To celebrate the historic ride, Angie received an invitation to attend an exclusive private dinner party aboard the Portland Aerial Tram for her and up to three additional adults.  Angie and her guests will enjoy dinner as they slowly glide above the city enjoying incredible views of the City lights. 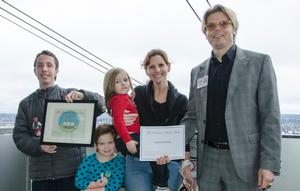 Since the Portland Aerial Tram’s opened in 2007, it has become a popular tourist attraction as well as a vital connection between South Waterfront and Oregon Health & Science University’s hillside campus.

In addition to the 10 millionth ridership mark,  the Portland Aerial Tram also has: 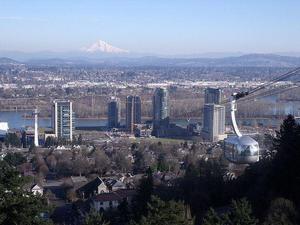 The Portland Aerial Tram is owned by the City of Portland’s Bureau of Transportation and operated by Oregon Health & Science University.    It opened to the public on Jan. 27, 2007. The cabins, named Walt and Jean, travel 3,300 linear feet between the South Waterfront terminal adjacent to the OHSU Center for Health & Healing, and the upper terminal at the Kohler Pavilion on OHSU's main campus. Traveling at 22 miles per hour, the tram cabins rise 500 feet for the three-minute trip over I-5, the Lair Hill neighborhood and the Southwest Terwilliger Parkway. Visit http://gobytram.com . Find the tram on Twitter @PortlandTram  and Facebook at http://www.facebook.com/portlandaerialtram.