Commissioner Steve Novick helped a family cross the road on their way to Prescott Elementary School.

(January 17, 2014) - Commissioner Steve Novick opened the school day at Prescott Elementary School by serving as a crossing guard, helping students and parents arrive safely as they used a new sidewalk that spans 11 blocks and connects two schools and a park in East Portland.

Novick’s visit was part of a dedication of the new sidewalk, which runs along the south side of NE Prescott Street from 105th to 116th avenues and had been sought by parents, community members and school officials to improve safety and access for students and families in the area. It replaces a gravel shoulder. The sidewalk connects Prescott Elementary School to Parkrose High School and extends east to Senn’s Dairy City Park.

“It certainly keeps our kids safe on their way to and from school. Safety is a big concern for us because we do have a very busy high-traffic area right around Prescott,” Prescott Elementary School Principal Chris McMurray told the commissioner. He added that the new sidewalks are a welcome investment in the community. “We want to be able to provide a safe and high quality neighborhood, and we’re building that community around the school,” he said.

“I’m happy to see the Portland Bureau of Transportation providing these kinds of safety enhancements to improve areas where we have high speeds, few connections, and where transit and active transportation play a crucial role in how residents get to where they need to go,” Commissioner Novick said, “When we’re able to make it safe and convenient for our young people to walk to school, we start them on a path that results in healthier lives and a healthier city. We decrease congestion and health care costs. We get cleaner air and a more sustainable city.” 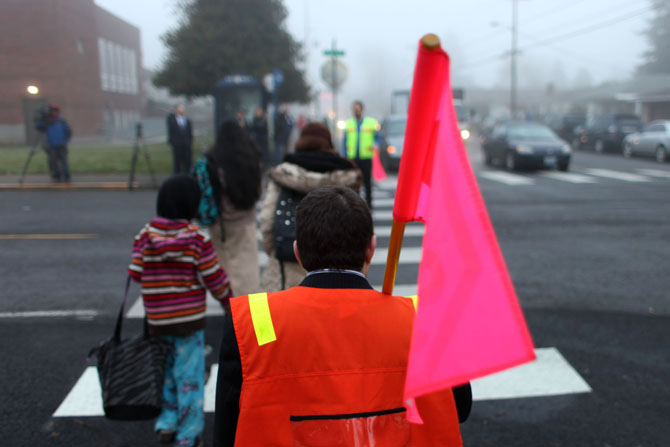 Commissioner Novick served as a crossing guard to celebrate a new 11-block stretch of sidewalk.

After assisting the school crossing guards, Novick joined Prescott’s second-graders for their breakfast and concluded his visit by meeting with fourth and fifth graders to discuss transportation and leadership.

Sidewalks help connect community members and increase the safety and walkability of neighborhoods. The City of Portland is working to identify funding to add this basic infrastructure throughout East Portland. The Portland Bureau of Transportation completed the sidewalk project this fall and will plant trees this winter.

This section of sidewalk was prioritized for construction via the Safe Routes to School and East Portland in Motion programs. In community meetings, residents asked the Bureau of Transportation to stretch the impact of limited dollars by building a longer stretch on the south side of the street rather than covering a shorter distance by adding sidewalks to both sides of the street. In addition, community feedback led the Bureau of Transportation to add a stop sign at Prescott Street and 115th Avenue after the sidewalk opened. The fully completed project was built for $940,000.

East Portland in Motion is the City of Portland’s five-year implementation strategy for active transportation projects east of 82nd Avenue.  In 2010/2011, the Portland Bureau of Transportation worked with the East Portland community to develop a prioritized list of projects to improve conditions for walking, biking and taking transit in the area. The East Portland in Motion strategy was adopted by City Council in April, 2012. Since then, over $47 million dollars of local, state, and federal funds have been allocated toward projects prioritized in the plan. 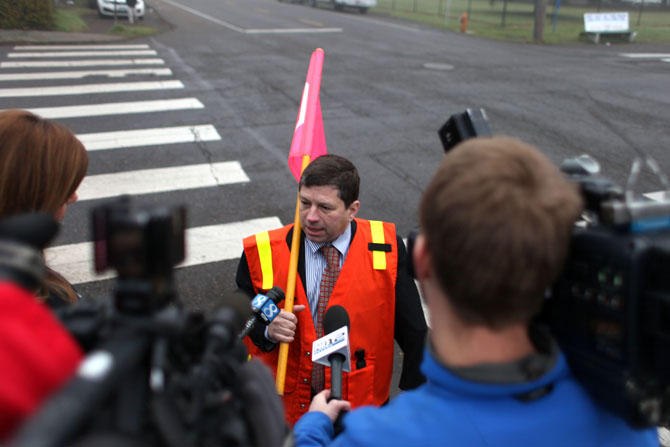 Commissioner Novick says he was delighted to get the sidewalk installed but there is much work to be done.