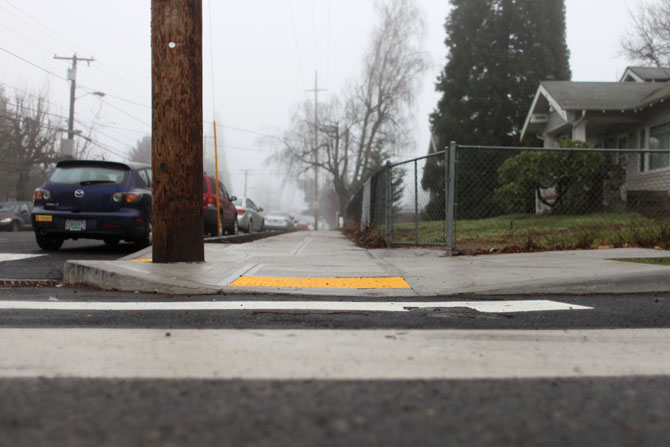 (Jan. 17, 2014) -- A new strip of sidewalk runs along the Northeast Prescott Street from 105th to 116th, 11 blocks in all. It looks like most any Portland sidewalk, maybe a little fresher, a little brighter, but nothing particularly remarkable.

And yet, for the students who walk on it every morning, for their parents, for the community, says Chris McMurray, the principal of Prescott Elementary, it’s much more than just a sidewalk.

“It’s practical and symbolic,” McMurray said. “Safety is a big concern for us because we do have a very busy high-traffic area right around Prescott. (But) the other thing that having new sidewalks does, is it shows investment in the community.

“We believe that we own this, and it does really help our students and our families connect to the school.”

More than 40 percent of the students at Prescott walk or bike to school, according to a City survey. Before the sidewalk, which connects the elementary school with Parkrose High and Senn’s Dairy City Park, was laid down, students would have to walk along the road, dipping in and out of yards. 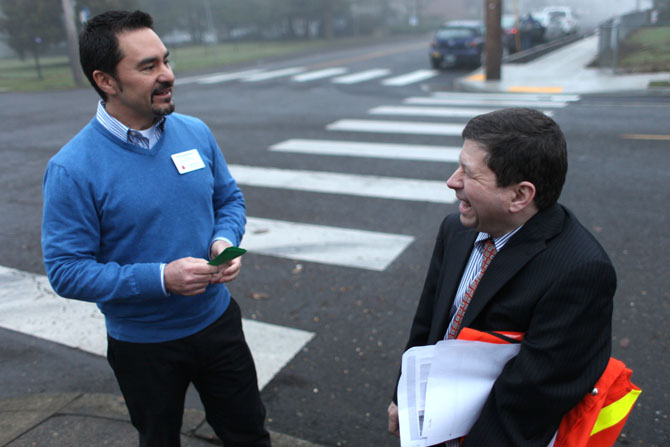 Commissioner Novick gets pointers on being a cross guard from Prescott Elementary Principal Chris McMurray.

On Friday morning, Commissioner Steve Novick, who oversees the Portland Bureau of Transportation, went out to Prescott to dedicate the sidewalk. He took a turn as an honorary crossing guard as students walked to school through a heavy fog.

The need for these projects in East Portland is huge, he said. So big it outpaces the Bureau’s resources.

“We’re delighted we were able to get this piece done,” Novick said. But “there are so many things left to do. We aren’t able to do enough of this.”

This stretch of Prescott had been identified as a high priority through the Bureau’s Safe Routes to School and East Portland in Motion programs.

Still, the money set aside to build the strip could only go so far. The new walkway runs along just the south side of Prescott, something residents had encouraged so the sidewalk would cover a longer distance. In all, the project cost $940,000.

“There’s just huge need. That’s why we probably are going to be asking people for more revenue,” Novick said, referencing a recently begun conversation about transportation needs and the potential for the Bureau to raise more money.

A few minutes before school was set to start, a woman appeared on the other side of the street, along with two little girls dressed in pink. Novick walked into the road to hold up traffic while they headed toward Prescott Elementary.

“It’s much nicer, it’s a lot easier to get around,” Erin Krupicka, the woman, said about the sidewalk. Her 6-year-old daughter already goes to Prescott and her other daughter, 4, will be starting next year.

These projects matter, Krupicka said. She lives in the area and she’s noticed the need for sidewalks.

This one in particular, she said, has been a long time coming. 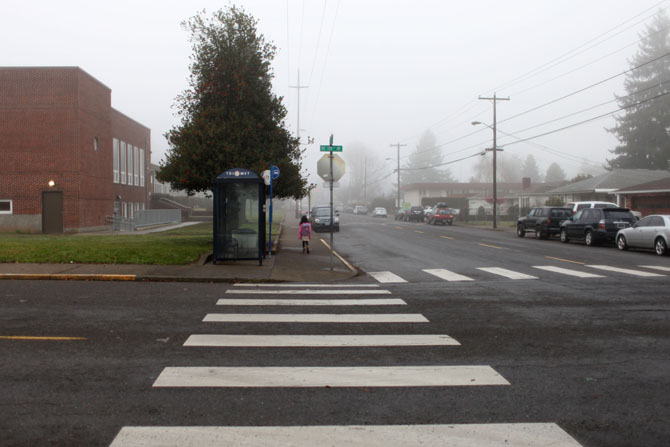 A young girl heads to class at Prescott Elementary School