Approximately thirty people from Portland and as far away as Eugene gathered on January 30th for the 3rd Annual Walk and Bike Networking Night, hosted by the Community Cycling Center. 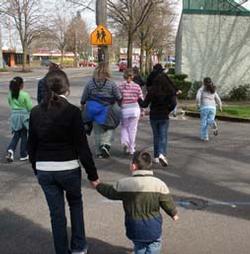 Sponsored by the CCC, the Bicycle Transportation Alliance, and PBOT Safe Routes to School, the event’s main goal was to connect participants with new ideas, resources and energy to promote safe walking and biking and to expand Walk+Bike and Safe Routes to School programs in the Portland metro area.

People attending came from with a variety of interests and concerns. Participants included Portland Police’s Officer Jason Mills, School Resource Officer for the Parkrose school district, Kristi Finney-Dunn, a safety activist whose son was killed on a bicycle near SE Division Street in 2012, the City of Eugene’s Zane Wheeler, who was interested in mountain bike camps and promoting skateboarding, Hosford Middle School staff member and walk/bike promoter Luke Wisher, volunteers from Bikes for Humanity, and Oliver Smith, a current Hatfield Resident Fellow at Washington County Land Use and Transportation, among others.

“The event brought together people interested in creating safer places for kids and adults to walk and bike,” said Abra McNair of PBOT’s Safe Routes to School. “We made valuable new connections to help us move forward with our goals, such as with the Alliance for a Healthier Generation.”