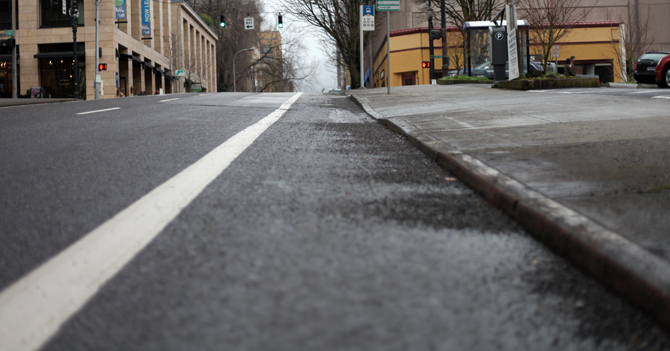 Gravel on SW Jefferson Street, just east of Broadway, was later swept up by PBOT crews.

(March 13, 2014) -- While transportation crews will continue to pick up stray gravel from bicycle lanes and city streets as part of its regular operations, the bureau’s concentrated post-storm cleanup has concluded two weeks earlier than projected.

Transportation crews have recovered 1,300 cubic yards to date, or enough to fill the beds of about 1,300 pickup trucks.  The city spread only about 1,000 cubic yards and only on the city's major snow and ice routes to aid in traction during the February storm that coated the city in snow and ice for five days.  But other agencies and private entities also added gravel to city streets.  The exact amount is not known.

To speed up the cleanup process immediately after the storm, the transportation bureau supplemented its night cleaning operations with a day shift, adding staff to both shifts and authorizing overtime.  That effort allowed crews to sweep all 1,700 lane miles of the city’s snow and ice routes in four weeks instead of the six to eight weeks originally estimated.  The city has wrapped up overtime operations and returned to regular crew schedules.

Because gravel scatters so easily, and is readily picked up and spread by vehicle tires, travelers will still encounter stray gravel on streets, including areas where the city did not apply it.  To report areas in need of additional cleanup, the public is encouraged to call Transportation Dispatch 24/7 at (503)823-1700.

March 3, 2014 UPDATE:  Transportation crews have picked up more than 800 cubic yards of gravel.

(February 26, 2014) - February’s winter storm brought us snow, more snow and then freezing rain in a five-day blast that made travel difficult and led the City, at one point, to warn residents not to travel at all.

During the storm, the Bureau of Transportation worked round the clock in 12-hour shifts to keep major streets open for transit and emergency responders.  In addition to plowing, crews laid down gravel to aid in traction and safety.

With the snow gone, the gravel remains. Transportation maintenance crews are working hard to remove it. Gravel is part of the City's environmentally friendly approach to snow and ice response, but presents challenges to the traveling public, especially people who are bicycling.

As of the third week of February, or two weeks after the storm, the Bureau of Transportation has cleaned up 555 cubic yards of gravel, or enough to fill about 555 pickup trucks.  Crews have about 500 more cubic yards to go. What does that mean for travelers?

Here we answer the most frequently asked questions we’ve received from the public about gravel removal:

Q: How long will it take to remove gravel from city streets?

A:  Several weeks.  As soon as snow melted from city streets, Bureau of Transportation crews began the cleanup process.   It took city crews six to eight weeks after the storm of 2008. Our goal is to clear streets for travelers and recover the gravel as soon as possible and we are working to speed up the process. Gravel recovery is challenging because the City's limited number of sweepers travel 2-3 mph and have 518 miles of streets to cover, or about 1,700 lane miles. A lane mile is equivalent to one 12-foot wide lane, one mile long, and expresses the distance required to sweep streets that have multiple lanes.

Q: Why does it take the City several weeks for cleanup?

In addition, the City has a fleet of 55 trucks that can be equipped with plows.  After the budget cuts in recent years, the City only has 10 sweepers, with six able to pick up gravel.

Also, crews often need to sweep travel lanes more than once, since gravel can be scattered by vehicles and lanes that have been swept one day may contain new accumulations of gravel a few days later. 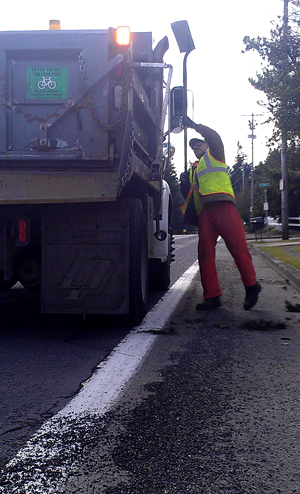 Q: What is the City doing to speed up the process?

A: The Bureau of Transportation has assigned crews to work night and day to remove gravel.  Night crews began in the downtown core and Willamette River bridges and their approaches during the hours when there is the least amount of traffic.  Day crews are working on major streets throughout the city, beginning in North Portland; they must navigate around parked cars and share the road with vehicles traveling at 25 mph or faster.

The map at the bottom of the post shows the City's snow and ice plow routes.  The orange highlighted areas show where night crews have swept as of Monday morning, February 24th, two weeks after the storm. The green areas are the streets covered by day crews.   During that time, the night and day crews picked up 555 cubic yards, or more than half of the gravel the City laid down.

Q:  I ride a bicycle and notice a lot of gravel in the bicycle lanes. What is the City doing to address the hazard that gravel poses to people traveling by bicycle?

A: Gravel in bicycle lanes is both an inconvenience and potential hazard. It can be slick for bicyclists to travel on gravel and pieces of gravel can also fly up from a tire and hit travelers. Also, people traveling by bicycle may need to travel outside the bike lanes and into traffic lanes where not everyone is used to sharing the road.

Transportation Bureau crews are prioritizing gravel sweeping on Portland's busiest streets with dedicated bike lanes. These areas include the Central Business District and Willamette River bridges (Multnomah County and the City work together on these bridges, which are owned by the County) as well as major streets with bicycle lanes.

Q: How much gravel is placed on city streets during a snowstorm?

A: For the snow and ice storm of February 2014, transportation crews put down more than 1,000 cubic yards of and gravel, roughly enough to fill the beds of 1,000 pickup trucks. This is less than in previous storms which sometimes required as much as 2,000 cubic yards.

Q: How many miles of Portland streets contain gravel?

A: Transportation crews plow 518 miles of city streets that contain a total of about 1,700 lane miles (major streets have multiple lanes).  The plow route includes the major routes that are vital for transit and emergency responders. Plow crews spread gravel only as needed, because they know it's a big job to clean up and a challenge for travelers, especially people on bicycle, to have gravel on the road. Crews limit placement of gravel to intersections where ice makes it difficult to accelerate from a stop, hills and flat areas that are icy. The 2014 winter storm caused widespread icy conditions.

The City does not plow or spread gravel on neighborhood streets, but it is possible that some gravel may have scattered onto other streets.

Q: What advice to you have for people traveling by bicycle?

A: For all travelers, the City recommends to drive or bicycle based on the conditions of the road and weather.  Where gravel remains, it’s a good idea to go slow.  If you’re riding a bicycle, this is especially true for downhill stretches to reduce the chance of having a tire slip or send gravel flying into the air.

When riding a bicycle, please note that neighborhood greenways on residential streets were not plowed and contain no extra gravel.   The City also prioritizes removing gravel from the Willamette River bridges and their approaches as well as on major streets with bicycle lanes so those routes should be clearer sooner rather than later.

Q: What advice do you have for people traveling by motorized vehicle?

A: Please go slower in areas with gravel; gravel can flip onto your windshield or fly into the path of other vehicles as well as hit people walking or bicycling.

In addition, please be aware that people on bicycles may choose to travel outside a bicycle lane to avoid gravel.  Please share the road and be cautious and courteous for the safety of all.

Q: What advice do you have for people who are walking?

A: Gravel may have settled on sidewalks after being kicked up by vehicles or having settled from a pile of plowed snow. The snow is gone but gravel may remain.  Please be aware that gravel can be a slipping hazard so use caution.

A:  Property owners are responsible for clearing sidewalks.  You are welcome to sweep gravel from sidewalks into the street against the curbline to aid sweepers. If you're using a leafblower or if you're sweeping, please make sure that you don't send gravel into travel lanes or bike lanes. Thank you.

Q: What does the City do with the recovered gravel?

A: The Bureau of Transportation recycles and reuses the gravel. For public safety, environmental concerns and budget reasons, we wish to recover as much gravel as possible.  We typically recover 60-75% of the sand and gravel we lay down - we clean it, pile it, and re-use it. The rest of it is unrecoverable because it is dispersed into grassy areas by traffic and wind and it is drained into storm drains by melting snow and ice as well as vehicle travel.

Q: Why doesn’t the City use salt like many cities on the East Coast?

A: The City uses a variety of environmentally safe road treatments that help contribute to safe driving conditions. Rock salt is not used because of environmental concerns – it is corrosive to our bridges and harmful to fish and wildlife in our rivers and streams.  The City uses gravel instead to aid in traction.

For more information, please visit the Bureau of Transportation's Snow and Ice pages. 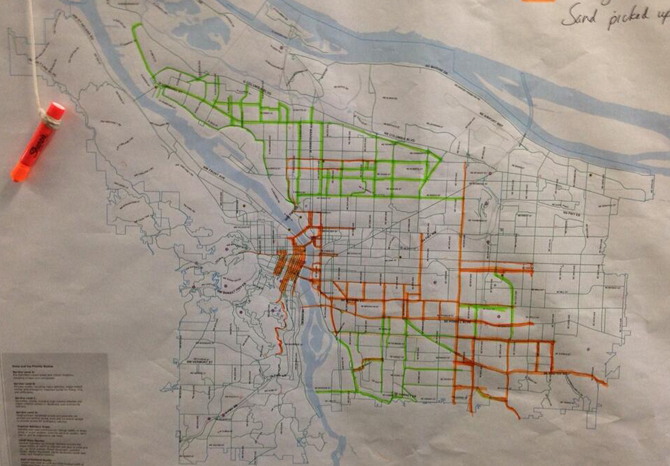 The Bureau keeps track of the routes sweepers have covered. Orange is night shift, green is day shift.