(May 5, 2014) – Families and neighbors are preparing to enjoy Mother’s Day at the City of Portland Sunday Parkways presented by Kaiser Permanente this Sunday, May 11 from 11 a.m. to 4 p.m. TheEast Portland route features a seven-mile loop of traffic-free streets that connects a variety of parks, including the popular Springwater Corridor trail.

The free event is the first of five Portland Sunday Parkways to be held monthly through September in different neighborhoods throughout the city.  Sunday Parkways opens the city's largest public space – its streets – for people to walk, bike, roll and discover active transportation.  Now in its seventh year, the hugely popular series is expected to draw an estimated 100,000 participants this season.

With the largest concentration of children in the city,East Portland was chosen to kick off the Sunday Parkways season on Mother’s Day, May 11.

“As a mom of four, I can say that Sunday Parkways is one of the best family events in Portland and a great way to celebrate Mother’s Day,” s 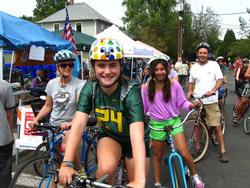 aid PBOT Director Leah Treat. “This first of the season Sunday Parkways highlights the neighborhood greenways in East Portland that help people experience our streets in a safe and healthy way this Sunday and every day.”

The seven-mile East Portland route  travels along current and planned “neighborhood greenways,” – streets where bicycling and walking are encouraged for every day travel. The neighborhood greenways are SE Bush, 87th and 100th avenues, Steele Street, Knapp Street and Holgate Boulevard.  The planned routes are 128th and 130th avenues.

The route also brings participants through neighborhood parks -Bloomington Park, Lents Park, Ed Benedict Park and Glenwood Park, the Foster Floodplain Natural Area and the Springwater Corridor. Music, vendors and activities are located in the parks and along the route.

“Portland Sunday Parkways is the perfect family activity, offering something for all ages,” said Dr. Rowena Manalo with Kaiser Permanente. “What better way to spend Mother’s Day than to get active and have fun, all while enjoying the outdoors?”

New this year will be the chance to play Kaiser Permanente’s “Health and Care Double Dare” game, which challenges teams of family and friends to get moving with interactive quizzes and fun activities, like hula hooping and a Frisbee toss. Visit the Kaiser Permanente booth at Glenwood Park at SE 87th Avenueto play. Sunday Parkways participants will also be encouraged to share their healthy “selfie” photo on social media using the hashtag #kphealthie.

In addition to the Portland Bureau of Transportation and presenting sponsor Kaiser Permanente,  Sunday Parkways is made possible by community partners Portland Parks & Recreation, Universal Cycles, Metro and AARP of Oregon, and hundreds of volunteers. 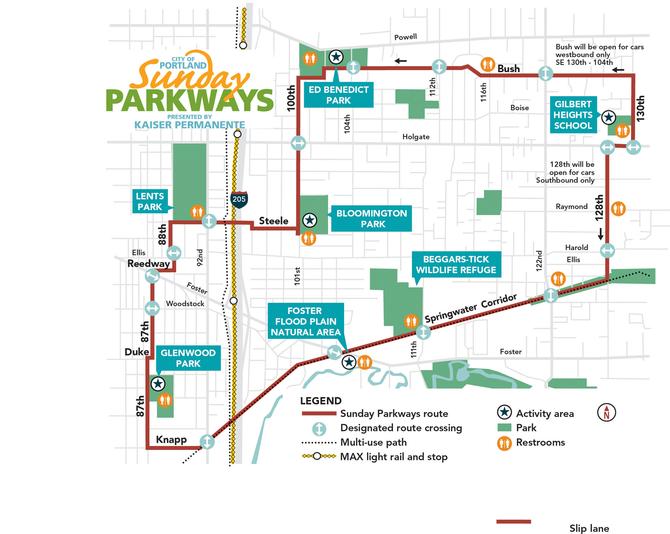