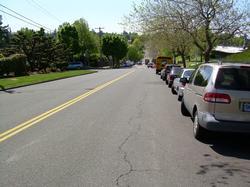 (May 21, 2014) - The Portland Bureau of Transportation has just installed bicycle lanes on both sides of SW Vermont Street from SW Capitol Highway to SW 10th Avenue as part of a repaving project that gives a fresh look to the street and safer connections to two schools.

“The steepness of the hill made a bike lane a better choice for the uphill portions. Since we had sufficient street width, we also chose to add a bike lane to the downhill portions. Incorporating bike lanes to each side should discourage speeding by creating the perception of a narrower roadway,” said PBOT project manager Kyle Chisek. 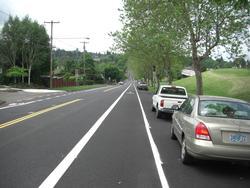 Delayed due to program cuts to PBOT’s FY 2012-13 budget, PBOT reduced the project cost significantly by incorporating the lane reconfiguration into a scheduled repaving of SW Vermont.

The project showcases the partnership between PBOT’s maintenance and safety programs. For questions, call Kyle Chisek, 503-823-7041.