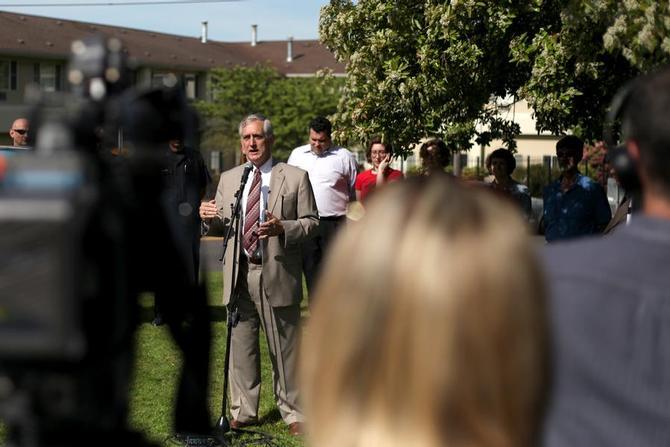 News conference materials: View or download the news release, draft ordinance and other materials presented at the May 22 news conference

There were 36 traffic fatalities in Portland in 2013, far more than the 16 homicides in the city that year, and neighborhoods continue to identify difficult intersections that the Portland Bureau of Transportation cannot address with existing gas tax revenues.

The condition of Portland’s paved streets continues to decline, with 48 percent of the busiest streets in poor or very poor condition – the most expensive condition to repair.

“Some things that a city does are mandatory, and some are nice, if you can afford it,” Mayor Hales said. “Taking care of our streets is mandatory. And for far, far too long, Portland hasn’t done that. That is why such a large percentage of our roads are in ‘poor’ to ‘very poor’ condition. We cannot wait any longer. Commissioner Novick and I were elected to lead. And we are.”

The proposal includes discounts for low-income households and credits for Portland residents who own small businesses.

The proposed fee would assess single-family households $11.56 a month, starting July 1, 2015. That rate is different from the $8 a month or $12 a month concepts transportation officials proposed for discussion during town hall meetings earlier this year, but it is the same rate as Oregon City – one of 28 cities in Oregon that have a local street maintenance fee.

“If it’s good enough for Oregon City, it’s good enough for Portland,” Commissioner Novick said. “There are 28 other cities in Oregon that have street fees, and Portland should follow their fiscally responsible approach. If we don’t invest in our streets now, we’ll continue to fall farther behind on maintenance and safety. I agree with the mayor that the City Council must lead on this issue.” 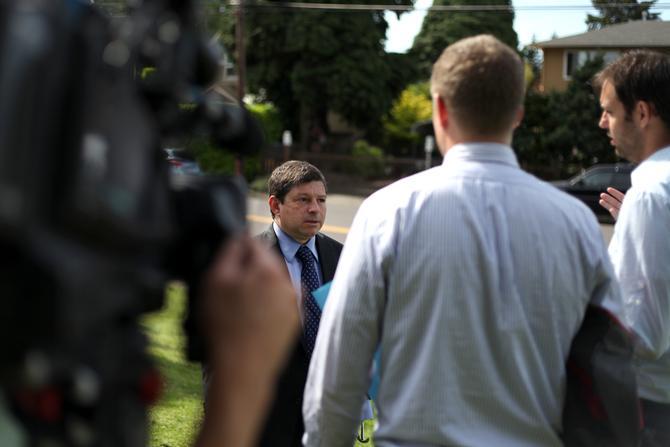 Portland’s transportation infrastructure is largely funded by federal and state gas taxes and vehicle fees, which have not been adjusted for inflation. The average Portland household currently pays $25.19 in state and local gas tax each month, with 11 percent, or $2.82 allocated to the City of Portland. The City’s General Fund, backed by property taxes, primarily pays for police, fire and parks. Only 2 percent the General Fund contributes to transportation.

Maintenance, safety priorities Under the proposal, the funds will be dedicated to transportation. At least 80 percent must be spent on maintenance and safety improvements. No more than 20 percent could be used to improve gravel streets, enhance public transit and cover administrative costs. The Mayor also announced that a Charter amendment will be brought to Council to dedicate revenue generated by the user fee to transportation improvements, and not other uses.

Business rates, small business credit As with water, sewer and electricity bills, the transportation fee would apply to businesses, colleges and other non-residential institutions that generate demand for transportation. About half the annual revenue would come from these non-residential ratepayers.

Proposed rates for businesses, public institutions and non-profits vary based on the type of business and square footage of the building. Since 60 percent of Portland non-residential ratepayers generate fewer than 5,000 trips per month, they would pay an average $76 a month.

A proposed Single-Owner Business Credit would reduce the amount owed by Portland-based businesses with fewer than 10 employees. Under the proposal, a business owned entirely by an individual or owned jointly by spouses/domestic partners who live in Portland would be eligible for a discount equal to the monthly single-family residential rate.

To help businesses and other organizations estimate how much their rate would be, the Transportation Bureau posted an online calculator today at OurStreetsPDX.com. An appeals process will be available to ratepayers who wish to contest their rates.

The Portland City Council will hold a public hearing on the proposal at 2 p.m. on Thursday, May 29. A vote is expected on Wednesday, June 4.