Who would have imagined a casual conversation turning into a city celebration attracting more than 100,000 every summer! That is how Sunday Parkways got started. As we come up on the twenty fifth event of this multimodal caravan through the city, it’s fun to reflect back on the “what do you think about. . .” conversation that got this whole thing started. 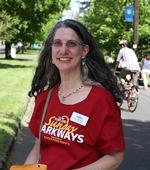 Ten years ago, Rich Cassidy, Portland Bureau of Transportation (PBOT) introduced himself to Nancy Stevens at Kaiser Permanente (KP) to strike up support for the opening of MAX’s Yellow Line in North Portland. The route made KP a natural sponsor for inaugural events. PBOT wanted to promote walking “to and from” destinations linked with transit. And KP was just starting the Community Health Initiative, promoting “health eating, active living” (HEAL). Little did they know how exciting and productive this partnership would be! These two community leaders enjoyed working together so much on the opening of the Yellow Line, they joined forces on PBOT’s Ten Toe Express and KP’s Interstate Farmers Market in 2005.

One day in 2006, Rich called Nancy and asked if he could meet to talk over another idea PBOT was noodling over. His colleagues, Linda Ginenthal and Janis McDonald, had just returned from a conference and heard a presentation on Ciclovías. They thought Portland would be an ideal location for an event like this. (Ciclovías started in Bogotá, Columbia in the late 1970’s as a way of connecting communities through active transportation. Ciclovías are now alive throughout Latin American and in over ten countries as a way to free up city streets from motorized traffic). 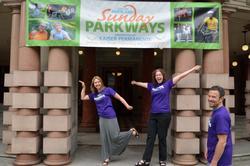 His first phone call was to Nancy at KP – she would have a fantastic network of community partners for just such an event. “Hey, Nance, I’ve got an idea for another partnership. What do you think about . . .” Her response was immediate: “This is a fabulous idea!” and Sunday Parkways was born.

The first Sunday Parkways was held in June, 2008, three in 2009 and five in 2010. On this, the twenty-fifth event, more than 478,000 residents, visitors, guests and their pets have “claimed the streets” on bikes, skateboards, wheelchairs, on foot, stilts, skates and all imaginable modes of transport. In just over six years, Sunday Parkways has become a Portland institution for the city to promote health, economic development and social cohesion. All this from one partner asking another “What do you think . . .”!

(Even though Nancy has retired from KP, she continues to be an avid supporter and volunteer of Sunday Parkways – you can find her at one of the Information Booths at Sunday Parkways!)