Correction: An earlier version of this post incorrectly identified the street that will receive a pedestrian flashing beacon. It is SE Woodward Street not Woodstock Boulevard

(June 5, 2014) – Construction is underway on the 50s Bikeway Project, a 4.3 mile safety corridor along 52nd and 53rd avenues that improves connections to eight neighborhoods, including 12 schools and seven parks, on Portland’s east side.

When complete this summer, the route will fill in a major missing link within the City’s bicycle network and better connect eight neighborhoods from Wo 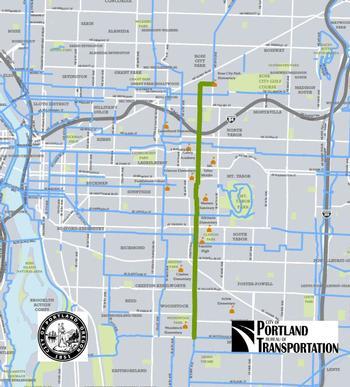 During construction in June and July, the public can expect intermittent lane closures on 52nd and 53rd avenues. Delays are expected to be minimal.

As part of the project, six major street crossings along the route will be upgraded to improve safety for people walking and bicycling.  Crossing improvement techniques will vary by location but will include a combination of curb extensions and medians in addition to a pedestrian flashing beacon at SE Woodward Street and a hybrid beacon at E Burnside Street.

The northern portion of the route will take the shape of a neighborhood greenway on 52nd and 53rd avenues, with signage and bicycle symbols called sharrows painted on residential streets from NE Sacramento Street to SE Division Street.

On the southern portion, from SE Division Street to SE Woodstock Boulevard, the City will install six-foot-wide painted bicycle lanes on either side of 52nd Avenue.  To provide the necessary space, parking will be removed from the east side of the street.

The $1.5 million project is funded through a federal grant.  After a year-long planning and public involvement process, the City Council unanimously adopted the '50s Bikeway Project in September 2011. In addition to public presentations at open houses, the project involved the guidance of a 17 member citizens’ advisory committee made up of representatives from the neighborhood and business associations along the route. Find out more at the '50s Bikeway Project.