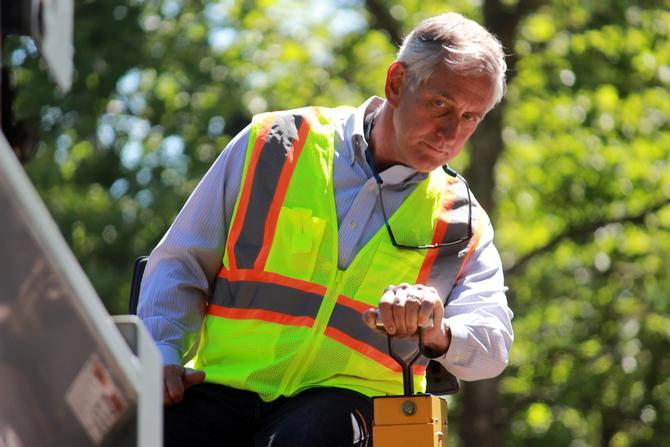 The 103-mile total for fiscal year 2013-14 is more than double the mileage preserved in the previous fiscal year.

This year’s work also marks the return of street maintenance to low-traffic neighborhood streets, a practice that City Council had discontinued in 2009 amid budget concerns and reauthorized for fiscal year 2013-14.  Neighborhood work focused on streets around schools.

The three officials also renewed their commitment to preserve at least 100 lane miles of city streets for the fiscal year that starts tomorrow.   They made their announcement at the last paving project of the year on NE Holladay Street between Ninth and 13th avenues in the heart of the Lloyd District.

“We promised we’d get back to basics and we have,” Hales said. “Thanks to the hard work of our maintenance crews, and using new techniques like fog seal, we have achieved our goal. Portlanders know we need to do more, and when we approve more funding for transportation later this year, we will be able to build on these achievements and get our streets back in the shape that all Portlanders deserve.”

“Preventive maintenance saves money in the long run,” Commissioner Steve Novick said. “The more we can do to keep our roads in good condition, the more we can avoid more expensive rebuilds later on. We will continue to focus our limited resources on the meat and potatoes of our transportation network by prioritizing maintenance on our streets and other critical assets.”

One of the challenges is rising material costs. Asphalt, for example, cost about $15 per ton 20 years ago and has quadrupled to around $60 per ton.

Novick also addressed a question he has heard from members of the public.  “We know that sometimes people see us doing preventive maintenance on a street and they ask ‘Why are crews working on that street when there’s another nearby that’s a lot worse?’” he said. “The truth is that we get the biggest bang for our buck doing preventive maintenance on streets that don't look bad yet but are beginning to show signs of wear. We get an additional 10 years of life on those streets for a fraction of the cost of a rebuild.”

PBOT treated the 103 lane miles with a variety of techniques.  Crews paved 47 lane miles of arterial or higher-traffic streets.  They treated 53 lane miles of streets with fog seal, a technique new to Portland that was applied mostly on neighborhood streets where traffic is lighter and where the sealant is the most cost-effective preservation technique. In addition, crews dug up, repaired and repaved 3 lane miles of badly damaged street sections.  A lane mile is one mile of street that is 12-feet wide.

“I’d like to thank our maintenance crews who have done an outstanding job, exceeding our 100-miles goal,” Treat said. “We have learned from our first season using the new fog seal technique and are focused on process improvements to become even more efficient in applying this technique next year.  I applaud and encourage our employees in their efforts to find new and innovative ways to maximize resources and deliver much needed improvements to our transportation infrastructure.” 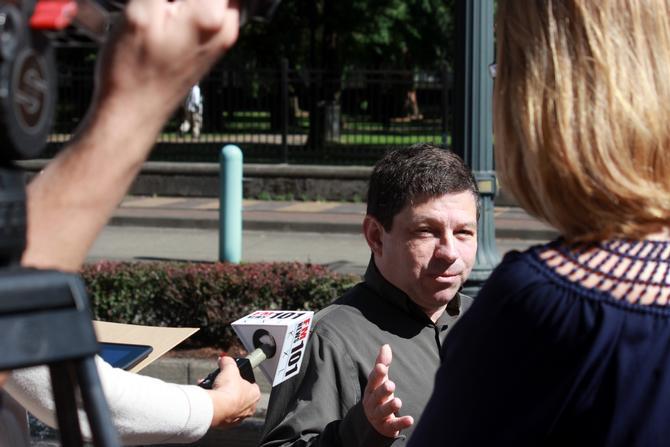 “I also want to thank the public for their patience,” Treat added. “We know that paving and fog sealing can be a short term inconvenience but the results serve our community for many years.”

The 2014-15 street maintenance goal includes 50 miles of paving on arterial streets, and 50 miles of fog sealing on neighborhood streets.

The first two paving projects for 2014-15 will begin after the July 4th holiday weekend:

Fog sealing will begin once temperatures rise above 80 degrees and continue through September, as weather allows. Fog sealing is a new technique for Portland, with the last year marking its debut.

The mixture of emulsified asphalt and recycled rubber tires is highly cost effective, requiring about $10,000 per lane mile as compared to paving which is roughly $150,000 per mile.  In its first year, PBOT crews learned that the technique works for Portland streets even in our rainy climate, but requires warm and dry weather to apply.

PBOT crews will focus fog sealing on streets that are within one-quarter mile of schools and along neighborhood greenways, the low-traffic streets that are part of Portland’s bicycling network.