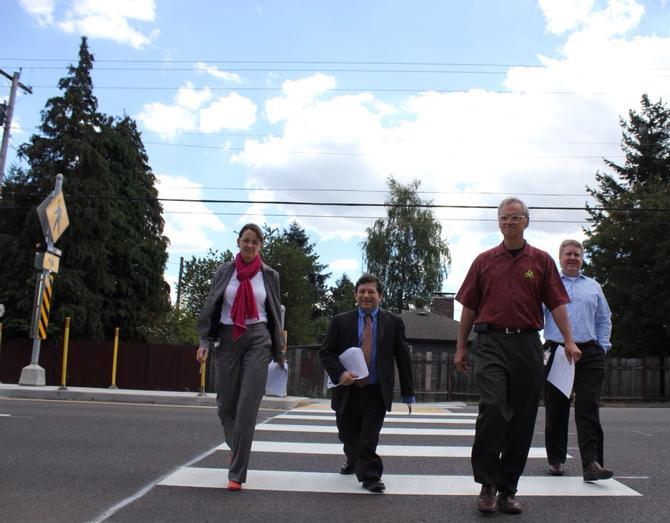 The five new beacons, which flash yellow when a pedestrian pushes a button, give a needed safety boost to the intersections, all of which cross multi-lane busy streets in East Portland. These pedestrian safety improvements, part of a package of 18 new beacons, were made possible by state funding secured last spring by East Portland Legislators.

“These safety improvements are effective and affordable solutions,” said Congressman Earl  Blumenauer. “I commend the hard work of officials at both the City of Portland and the State of Oregon for working together for the common goal of transportation safety.”

“Standing here at SE 113th and Stark, it’s clear that this busy, multilane street will now be safer and easier to cross for everyone, especially kids going to and from Ventura Park Elementary School and to Ventura Park,” said City Commissioner Steve Novick as he gathered with Congressman Blumenauer, State Rep. Vega Pederson and other officials and community members.

Community members have long identified these intersections as needing improvements. The Portland Bureau of Transportation committed to installing the first five by the start of the school year.In addition to SE 113th Ave. and Stark Street, the four other beacons activated at busy intersections are at: SE 120th Ave. and Foster Road, NE 141st Ave. and Glisan Street, SE 122nd Ave. and Stephens Street and SE 122nd Ave. and Oregon Street.  The State of Oregon has also installed a beacon on US Route 26 at SE Powell Boulevard and 168th Avenue. The others will be installed over the next few months.

“These improvements are significant. A motorist is five times more likely to stop for a pedestrian at crossings with beacons than one without,” Novick added. “That can be a matter of life and death on a busy, wide street. I appreciate the collaborative effort with the state and federal government to make these needed infrastructure improvements throughout the city.” 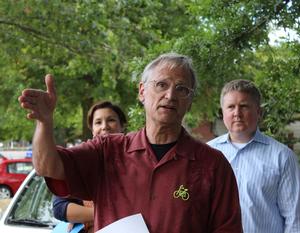 "It's a strong step forward for East Portland to have more ways for kids to travel safely to school,” said Oregon State Rep. Jessica Vega Pederson. “There's more work to be done, but this is a great example of a partnership that should and must continue. The entire East Portland delegation and I will continue to advocate for safety improvements in East Portland."

Novick and Leah Treat, director of the Portland Bureau of Transportation, also pointed to a map of Portland showing the new beacon locations as well as many more intersections in need of safety improvements.

“As a mother of four kids, I care deeply about safe crossings and want to make sure all kids can walk and bike to school safely,” Treat said. “These safety beacons are an important tool and support our philosophy that any road fatality is one too many.”

“The beacon you see today, along with 17 others throughout the city that have been or will be installed were paid for with $1.9 million in ODOT transportation funds,” said ODOT Region 1 Interim Manager Rian Windsheimer. “I want to thank our East Portland legislators and Commissioner Novick for their leadership and commitment to transportation safety. It will take all of us, working together, to improve safety for all modes.”