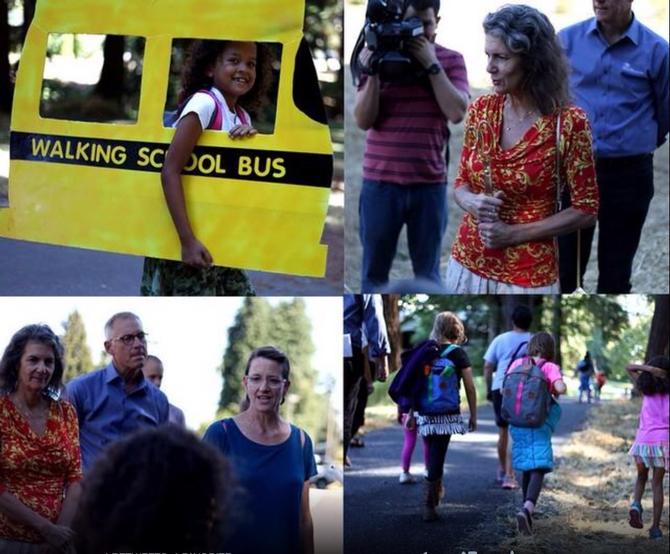 (September 12, 2014) -  Friday’s walk home from school was a celebratory occasion for North Portland school children who joined with City officials to parade along a new paved path from Sitton Elementary School through Pier Park to a ribbon cutting ceremony led by Commissioner Amanda Fritz.

The new paved path, which is roughly as long as five downtown City blocks, replaces a dirt route that often turned muddy for the hundreds of families that cross Pier Park daily.  The path connects several large apartment complexes in this section of St. Johns neighborhood to Sitton and George Middle School as well as to transit, shopping and other services along Lombard and Fessenden Streets.

“It makes me proud to help lead a city that can work together and deliver on an important neighborhood request,” says Portland Parks Commissioner Amanda Fritz.  “The trail will be an important connector and improve safety for kids, parents, and other neighbors here in St. Johns.”

The City paved the path in response to community members who organized a petition signed by 400 families asking for improved safety for their children as they traveled to school.

“You asked, and we are delighted to respond and create this safe route to school,” said Leah Treat, who directs the Portland Bureau of Transportation. “I am committed to improving safety throughout Portland, especially around schools.  Walking and biking to school safely also means that kids can get a healthy and fun start to their day.”

“Our parks deliver many benefits to Portlanders, and now we can add one more: providing an essential route for kids and families,” said Portland Parks & Recreation (PP&R) Director Mike Abbaté.

The project brought together many partners to create a solution to neighbors’ concerns. PBOT’s Safe Routes to School team worked with parents, managers of the apartment complexes next to Pier Park, PP&R, the City’s Office of Neighborhood Involvement’s Crime Prevention program, Portland Public Schools, Friends of Pier Park, and many other partners to put together a strategy to better serve the families in the neighborhood.

Managers of the nearby apartment complexes are also building new paved paths on their campuses so that families have a continuous network of paved walkways.