The attendance of 10,600 people at the last event of the season held in Southwest Portland sent off the last Sunday Parkways with a dazzling bang!

The sun set the precedent for the day, heightening spirits and drawing people outdoors to share in a sun-filled fall day. Families and friends were swept into the four buzzing activity hubs at Hillsdale Shopping Center, Troy Street Marketplace, Multnomah Village and Gabriel Park enticed by either the walking path or the cycling path to move along the six mile pathway. For those who choose the walking path, they were one of 1900 people counted! The total breakdown was 40% walkers and 60% bikers. A 100% win for fitness. 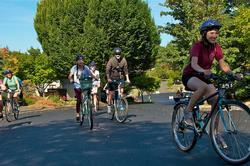 The beautiful day continued with pear-tasting at Food Front at the Hillsdale Shopping Center, along with bike repair, the smell of steaming hot tamales, and the smooth sounds of Jon Koonce Trio.

Those sounds almost carried down to Troy Street Marketplace, where Portland Fire & Rescue firefighters trained attendees on hands-on CPR instruction and AED awareness all day. Both pedestrians and cyclist visiting Troy Street Marketplace probably crossed paths with President Abraham Lincoln (well his impersonator) as they passed in front of fruit adorned cars and the Eco Womb truck, all which were provided by the Right to Know campaign troupe.

In Multnomah Village, attendees may have bumped in the Portland mayor, who rode out to support Sunday Parkways and to enjoy a fun sun day. In the village of Multnomah he like other attendees, enjoyed the old school beats emanating from DJ Doc Rock’s DJ table, the sounds of smiles from children and adults hula hooping, and the range of food, exhibitors, and more.

Just a couple hills a way was Gabriel Park, a playhouse of grass, trees, theatre, and more that awaited those who made it down from Hillsdale Shopping Center. Clif Kid offered delicious samples. The Jewish Federation of Greater Portland transformed children into ferrets and fairies with face paint and provided challah and honey samples. Zumba and Hip Hop brought lots of people out to dance thanks to the Parks and Recreation fitness instructors. While shade and amusement was found at the Opsfest Stage, while those not tired from the hills took up stilt walking, ball balancing acts, and one unicycles with Circus Cascadia.

In total, the day was filled with fun for everyone, and we could not have done it without you. Thank you sponsors, donors, vendors, volunteers, entertainers, police, flaggers and participants for making the last event of the year such a great one. We look forward to seeing you again next year. For updates, check us out on Twitter and Facebook.