The results demonstrate the value of these reconfigurations as a tool to improve safety on busy multi-lane streets.

PBOT analyzed crash data on all five road sections in Portland where the bureau reorganized a two-way arterial from four vehicle lanes to two vehicle lanes and a center turn lane. In some instances, Portland also added bicycle lanes. PBOT often refers to these changes as “road reconfigurations.” Nationally, this treatment is known as a “road diet.”

On Portland’s streets that have undergone road diets, PBOT’s analysis found on average: 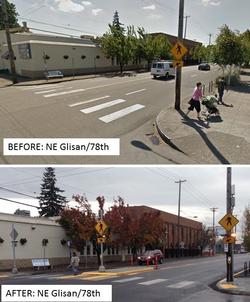 In addition, the amount of traffic dropped six percent, which mirrors traffic volume reductions across the City since 2005.

The Federal Highway Administration (FHWA) has identified these road reconfigurations as one of nine “proven counter safety measures” to reduce speeding, crashes and fatalities.

FHWA notes that road diets provide multiple benefits to all road users. These benefits include improved vehicle compliance with posted speed limits and a corresponding decrease in crash severity; reduction of “multiple threat” crossings for pedestrians (one driver stops for pedestrian while driver in adjacent lane does not); reduction of rear-end and side-swipe crashes; increased opportunity for on-street parking, and improved safety for bicyclists when bike lanes are added (which also provide an additional buffer for pedestrians).

*The 85th percentile speed is a value that is used by many states and cities for establishing regulatory speed zones. It is the speed that 85% of vehicles are observed traveling at or under during free flowing conditions.