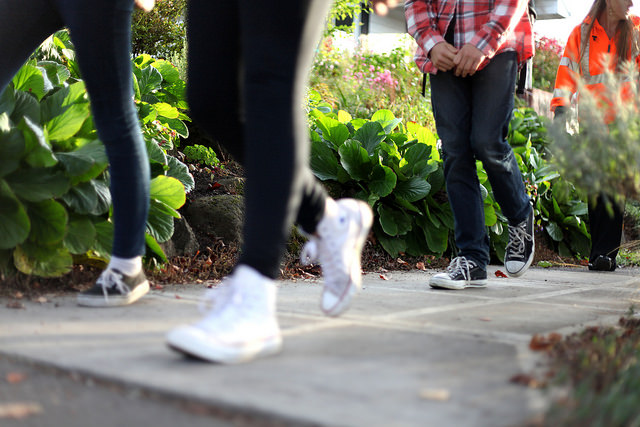 (October 8, 2014) –  Thousands of school children from more than 60 schools in Portland celebrated International “Walk Bike to School Day” on October 8, 2014, showing that it’s easy, fun and healthy to walk and bike to school.

City Commissioner Steve Novick, Transportation Bureau Director Leah Treat, Principal Pam Joyner and other officials joined students in a “walking school bus,” on the way to Southeast Portland’s Hosford Middle School and lauded the Safe Routes to School program that has dramatically expanded the number of children who get to school on foot and bike in the Portland area.

Since its start in 2005, Safe Routes to School has increased the number of elementary school students who bike and walk to school by 35 percent. The program, which combines education and fun events
with safety improvements to streets around schools, now operates in 100 percent of K-8 schools in the Portland area.

The Hosford celebration marks the expansion of Safe Routes to School into Portland’s 14 middle schools, and sends the message that biking and walking is a lifetime healthy activity.

“I’m thrilled to announce the expansion of the Safe Routes to School program to our middle schools,” said Commissioner Novick. "Portland's Safe Routes to School has proven to be a national success for our elementary students-- of whom 42 percent walk or bike to school. Yet, without sidewalks or bikeways, walking or biking to school isn't a viable option to students in all neighborhoods. We'll continue to work hard to secure the resources to make infrastructure improvements that making getting around safer in any neighborhood."

“I’m pleased to say that as you grow up, the Safe Routes to School program is growing with you,” said Leah Treat, transportation bureau director. “Students who walk, bike, skate, scoot and use their own power to get to school arrive with their engines running and brains ready to learn.”

On their morning walk to Hosford, Novick and Treat were joined by dozens of students as well as Principal Joyner, Portland school board members Bobbie Regan and Greg Belisle, and advocates for walking and biking such as the Bicycle Transportation Alliance’s Rob Sadowsky and Oregon Walks’ Noel Mickelberry and Cory Poole from the NW Skate Coalition, as well as Kaiser Permanente’s Dr. Fern Russak.