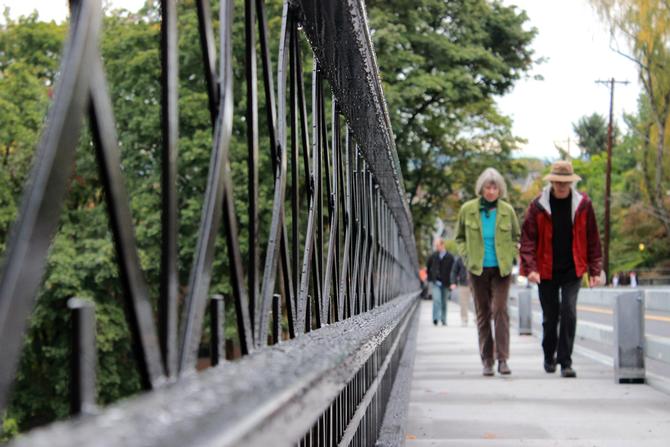 (Oct. 17, 2014) Commissioner Steve Novick and the Portland Bureau of Transportation celebrated the reopening of the NW Thurman Street Bridge, the oldest bridge in Oregon, in a ceremony today at Lower Macleay Park in Northwest Portland.

The six-month rehabilitation project strengthened the bridge and restored historic features for the structure, which was built in 1905, in time for the Lewis & Clark Centennial Exposition, a fair that preceded a remarkable era of growth in Portland.

“Not only does the Thurman Street Bridge have a great historic legacy, it is a hallmark of the surrounding neighborhood. Through well-coordinated collaboration of multiple City bureaus and government agencies, we were able to preserve the historic character of the bridge while modernizing it to meet today’s needs,” said Commissioner Novick, who oversees the Transportation Bureau. “Local residents have been incredibly patient as crews worked, and we’re all very excited to know that the bridge will stand tall for many more years to come.”

The bridge is a gateway to Forest Park and a crucial route for Northwest Portland residents, said Phil Selinger, board member of Northwest District Association, the neighborhood association for the area.

“It was a challenging project, but to the Willamette Heights community this is their portal, one of only a few ways to get to the neighborhood,” Selinger said. “The City did an excellent job of finding the funds, researching the history, and giving back to the neighborhood something that is so much nicer than we had before.”

With the rehabilitation complete, the weight restriction has been lifted and a fire truck crossed the bridge today for the first time in about 20 years.

“We are excited about the completion of this rehabilitation and modernization project!” said Portland Fire & Rescue Emergency Operations Division Chief Jim Forquer who is in charge of Emergency Operations for PF&R. “Regaining the use of the NW Thurman Street Bridge will improve our response times into many of these areas by over 4 minutes and during a critical medical event or fire, every second counts.”

The old wooden deck was subject to seasonal moisture-induced shrinkage and expansion, which contributed to cracks and potholes on the road surface. The new deck is made of steel girders, steel deck panels, concrete infill and an asphalt surface that should be more durable.

The Oregon Chapter of the American Public Works Association named it Project of the Year for 2014 for Historic Restoration/Preservation projects under $5 million. The award, announced Thursday night at a conference in Pendleton, named the City of Portland and contractor Cascade Bridge LLC of Vancouver, Wash.

NW Thurman Street Bridge at Macleay Park is also known at the Balch Gulch Bridge, named for Danford Balch, an early settler of the area that later became Northwest Portland.

In 1905, the bridge was lined with a beautiful pedestrian railing. However, in 1955, it was replaced with a green chain link fence. The rehabilitation project installed a new decorative railing, modeled after the original.

“One of the great parts of the current rehabilitation project was recreating the historic ornamental-style railing and adding a bit of style with the pine cone end post caps befitting the location at the entrance to Forest Park,” said Robert Hadlow, historian for the Oregon Department of Transportation.

The bridge was closed for construction April 1 and reopened on Friday, Oct. 10.

David O'Longaigh, the City Bridge Engineer, thanked TriMet for providing shuttle service during the construction period and thanked the Bureau of Environmental Services and Portland Water Bureau for their cooperation.