(December 26, 2014) - Travelers along North Williams Avenue will now notice the new traffic signal at N.E. Cook Street and N Williams Avenue - which marks one of the last major pieces of the N Williams Traffic Safety Project.  The installation also signals the end of a three-year journey to redesign this major street that serves a growing neighborhood, is the city's busiest bicycle commute corridor and serves transit and drivers.

The $1.5 million project, funded through grants, has transformed N Williams Avenue to be a safer place for all travelers by addressing the many issues that neighbors, community and business representatives and PBOT staff identified through a 16-month public involvement process in 2011 and 2012. 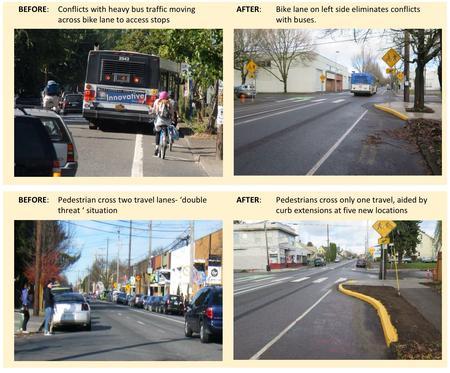 The new street design, installed on time and on budget, uses an innovative approach to traffic calming which reallocates the roadway space to better balance N Williams as a neighborhood-oriented street that puts pedestrian safety first.

The main safety benefit is achieved by reducing the speed of the street.  Given how many people walk along N Williams in a given day, PBOT also boosted pedestrian safety by streamlining the number of travel lanes that pedestrians need to cross –from two to one.   Curb extensions constructed at five different locations further improve crossing safety.

The street width has been reallocated to where it was most needed – the bike lane.  Bicycle use has increased dramatically over the past decade and had exceeded the capacity provided by the old configuration.  The overall impact to auto traffic capacity is minimal because the travel lanes can continue to accommodate current and projected number of vehicles. In addition, the point where the most congestion is generated – the signalized intersections – remains unchanged.

The new design’s other major safety improvement was achieved by shifting the bike lane to the left side of the street, which eliminated the conflict that occurred when heavy bus traffic moved across the right-side bike lane to get to and from transit stops.

Minor construction activity will continue for the next several weeks to finish the project, largely related to signage and striping work.

This winter, PBOT will conduct a full operations assessment to identify and address any additional modifications to improve operations.

Beginning in the new year,  PBOT will finalize public involvement for design recommendations for the adjacent Rodney Neighborhood Greenway Project, which complements the improvements to N. Williams and is funded through the same state grant.  Construction is expected to begin later next summer.

In January construction of a new traffic signal at N Vancouver and Cook Street will begin.   Funded by a separate Local Improvement District, in which private property owners pool their resources to fund the project, this signal will complement the new one at Williams and Cook by improving safe access to the freeway.

Work also continues on the Honoring History element of the project. North Williams was the historic center of African-American life in Portland.  A subcommittee made up of original Stakeholder Advisory Committee members is working with the Regional Arts & Culture Council to develop an art project that provides education about the historical change in the surrounding area. That project is expected to be installed by summer 2015.

View more "before and after" pictures here: 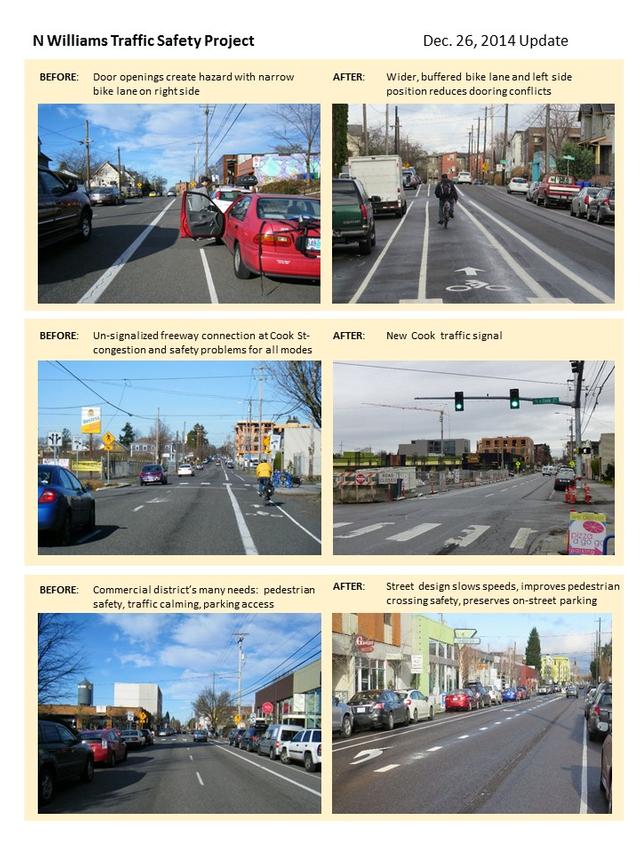