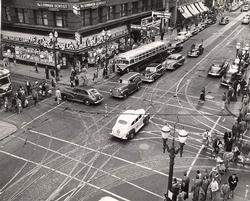 One of the ways we’ve been able to achieve this is because Portlanders are driving less. Yet transportation of goods and people still accounts for nearly 40 percent of Multnomah County carbon emissions. How we move around makes a difference, and land use patterns make a difference on how we move around.

Portland was the first U.S. city to adopt a plan to cut carbon in 1993. That plan put Portland and Multnomah County on a path to reach a 40 percent reduction in carbon emissions by 2030 and an 80 percent reduction in carbon emissions by 2050 (based on 1990 levels). The 2015 draft Climate Action Plan builds on accomplishments to date with ambitious policies, new research and engagement with underserved communities.

According to the plan, 60 percent of Portlanders are currently being served by “healthy connected neighborhoods” that support the health and well-being of residents. Healthy connected neighborhoods afford people of all ages and abilities safe and convenient access to the goods and services needed in daily life – grocery stores, schools, libraries, parks, and jobs – reachable by foot, bike or transit. Forty percent of Portlanders still live in neighborhoods that lack safe and convenient access to transit, commercial services, jobs, or in many areas such as East Portland, even sidewalks. Addressing this inequity is one important piece of the plan.

The draft 2015 Climate Action Plan has been released for public comment and can be viewed here - http://www.portlandoregon.gov/bps/49989. Public comments are due by April 10.