(April 16, 2015) – The Portland Bureau of Transportation and Portland Police Bureau advise the traveling public that a crosswalk enforcement action is scheduled for Wednesday, April 22 at the unmarked crosswalk of NE 82nd Avenue and NE Pacific Street from 10 a.m. to 2 p.m. to raise awareness of pedestrian safety and Oregon traffic laws. 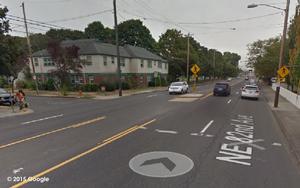 Southeast 82nd Avenue is one of ten High Crash Corridors that the Portland Bureau of Transportation has prioritized for stepped up education, enforcement and safety improvements.

Under Oregon law, EVERY intersection is a legal crosswalk whether it is marked or unmarked.  Drivers are required to stop and stay stopped for pedestrians when the pedestrian is in the motor lane or the adjacent lane.  Drivers are required to stop for the entire length of the crossing if the person crossing is blind and using a white cane or guide dog.

Failure to stop and stay stopped for a pedestrian in the crossing is a Class B violation with a fine of approximately $260.

The NE 82nd Avenue and NE Pacific Street crossing has no paint lines at the crosswalk. It does have a pedestrian median island and signage to alert drivers to the possible presence of pedestrians in the crossing.

Each crosswalk enforcement action involves a designated pedestrian crossing at a marked or unmarked crosswalk while police monitor how people driving, bicycling and walking adhere to traffic safety laws. Drivers who fail to stop for pedestrians in the crosswalk and pedestrians who fail to follow Oregon traffic laws may be issued a warning or citation.

Portland Bureau of Transportation’s Sharon White will serve as the designated pedestrian crossing the street during the first half of the action and a Portland police officer will serve that role during the second half.

Crosswalk enforcement actions are an effective way to communicate pedestrian right of way laws to both drivers and pedestrians. The transportation and police bureaus do enforcement actions about once each month in response to requests by community members, city traffic safety engineers, and Portland Police to educate the public on the rules at marked and unmarked crossings.