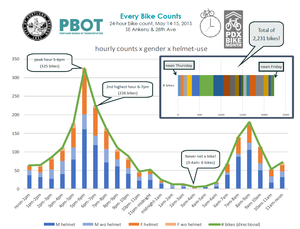 (May 20, 2015)  Whether it’s rush hour or the middle of the night, people are always riding bikes in Portland. That was one of many takeaways from the Portland Bureau of Transportation’s (PBOT) first human powered 24-hour bike count event. Every Bike Counts began counting people biking on SE Ankeny at 28th Avenue on Thursday, May 14th at noon and continued through the night until noon on Friday, National Bike to Work Day.

One of 20-plus events during May’s National Bike Month Every Bike Counts preceded PBOT’s massive Summer Bike Count, where staff and hundreds of volunteers conduct two-hour counts at 245 locations throughout Portland from June to September. In addition to these two-hour counts, PBOT conducts automated, continuous bike counts 365 days a year on Portland’s five bike friendly bridges and the SW Moody multiuse path.  You can view the bicycle trip data for the Hawthorne Bridge here: http://portland-hawthorne-bridge.visio-tools.com/.

Unlike the Summer Bike Count, which uses the industry protocol of extrapolating the two-hour commute peak count to derive a daily number, the 24 hour count provided a more textured illustration of how people use one of Portland’s most popular neighborhood greenways. Some trends remained the same: Helmet usage for men (74%) and women (85%) practically mirrored the 2014 Summer Bike Count usage (75%, 84% respectively).

While Portland’s bicycle count data is the envy of the nation, it pales in comparison to motor vehicle travel data collected by regional and federal agencies. PBOT is partnering with a local technology startup, Knock to pilot a low-cost count sensor and smart phone app to explore cheaper, more reliable, 24-hour bike data collection options. Knock group did a test run during peak hours at Every Bike Counts and are comparing their data to the manual count data. PBOT and Knock plan to pilot the sensors later this summer. Those interested in beta testing the Ride smartphone app for iPhone can email at metoo@ride.com.

PBOT chose the SE Ankeny/28th avenue intersection because it is a centrally located, well-utilized neighborhood greenway that intersects with a popular neighborhood commercial corridor.

The 24 hour bike count was lower than the 2014 SE Ankeny summer count estimate of 2715.  Since the Summer Bike Counts are conducted only from Tuesdays through Thursdays (Mondays and Fridays typically have lower traffic volumes), the 24-hour Every Bike Counts count did not provide an apples-to-apples comparison to the Summer Bike Count data.

Those interested in volunteering for PBOT’s Summer Bike Count (that haven’t volunteered before) must attend the volunteer training on Tuesday, May 26th from 6:00 – 7:00 p.m. at the Portland Building (Room C, 2nd floor).

See all of our charts and data from Every Bike Counts here: http://www.portlandoregon.gov/TRANSPORTATION/article/531278