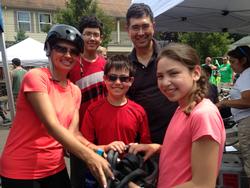 ABC is comprised of Cully Neighbors who are committed to organizing and providing programs to promote active living in Cully. In 2009, the ABC group bloomed from collaboration between Hacienda Community Development Corporation and Community Cycling Center after they launched the Understanding Barriers to Bicycling Project. The group ignited by the project saw an opportunity to promote physical activity, community bonding and address social isolation for residents living in predominantly immigrant communities in Portland. The group continues to receive support by the two nonprofits in which it found inspiration, and now has been going strong for six years.

ABC also partners closely with Verde. Verde is Hacienda CDC’s sustainable development branch that focuses on bringing new environmental investments to Portland’s neighborhoods that are both low income and that offer few green spaces. It’s most recent victory, through a coalition that grew to form the Living Cully company, has been its purchase of the Sugar Shack to be re-developed into a resident designated community place. Andando en Bicicletas en Cully and Verde organize many rides and events together, such as a ride to Khunamokwst Park earlier this year, right before its grand opening.

For more questions about exciting developments in Cully or to hear ABC group’s bike expertise, stop by Khunamokwst park between 11 am - 4 pm~! 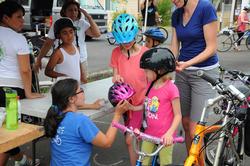 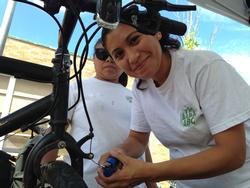 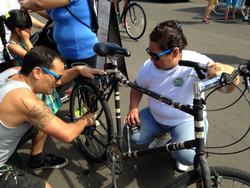 ABC group is bringing its accumulated bike knowledge to Sunday Parkways on July 26th in the form of a Bike Fair. The Bilingual Bike Fair can be found at Khunamokwst park between 11 am - 4 pm~! The Fair is sponsored by Central Northeast Neighbors and Voices for Healthy Kids.

Activities offered at the Bike Fair include:

Helmet Fitting and ride (2pm - 4pm): We will offer free helmets and provide safety education. A small group will lead a bike ride on the route for neighborhood kids.

Foto Voz: ABC will share pictures from the PhotoVoice project they are working on. The project documents infrastructure needs for improving safe access to parks and Schools in the Cully neighborhood.

The activities will be in both English and Spanish.