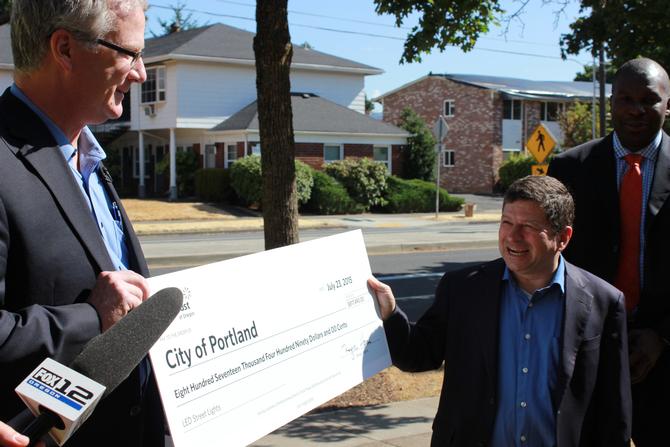 (July 23, 2015) –  Commissioner Steve Novick today announced that the Portland Bureau of Transportation had surpassed two major milestones in the city’s largest ever energy efficiency project:  More than 20,000 city street lights have been converted to modern LED lights, and savings from the program have now topped $100,000 per month. Those monthly savings will continue to grow as more lights are converted.

The benefits don’t stop there. Commissioner Novick and Transportation Bureau Director Leah Treat also accepted a ceremonial check of $817,490 from Energy Trust of Oregon, which provides incentives and discounted pricing to government, businesses and residents to convert lights to energy-saving LEDs, or light-emitting diodes, a relatively new technology that has quickly taken hold in the energy marketplace. The check represents the incentives for the 20,000 LED streetlights installed to date.

“The city is benefiting in so many ways from energy-saving LEDs. Whether you’re a resident or a business owner, you can too,” said Commissioner Novick at a news conference in North Portland’s Peninsula Park, where crews were changing lights along the surrounding streets. “We are saving money, we are saving energy and we are cutting down on climate disrupting carbon pollution. Plus, each neighborhood will benefit from street lights that last four times longer and provide reliable light for people’s safe travels on our streets and sidewalks.“

The new LED street lights use half the energy of the high-pressure sodium bulbs they replace and are expected to last up to 20 years. They also prevent about 10,500 tons of carbon pollution each year.

“We’re pleased to be working with the City to make a change that has such great benefits – both in cost and energy savings and in the safety and livability of neighborhoods,” said Margie Harris, executive director, Energy Trust. “We’ve seen a dramatic surge in both homes and businesses making the switch to LED lighting. Last year, 68 percent of our record high lighting savings in existing buildings came from LEDs, including indoor fixtures, street lighting, exterior fixtures and lamps.”

The news conference marked the halfway point in the city’s conversion process. PBOT crews began changing 45,000 of the City’s 55,000 street lights to LEDs a year ago, a process that is expected to be complete by the end of 2016. As of this week, 22,676 street lights have been switched.

Portland City Council unanimously passed an ordinance in December 2012 to authorize the conversion, dedicating $18.5 million to the project from a general obligation bond. Once the project is complete, the City can expect to save $1.5 million a year in maintenance and energy costs. At that rate, the project will pay for itself in eight years. At the direction of City Council, future years’ savings will be used as a sustainable revenue stream for street light maintenance, purchasing green energy, and to finance the next round of upgrades about 20 years from now.

The $1.5 million annual savings is a conservative estimate and actual savings may be higher, said PBOT Director Leah Treat. “I am pleased that the savings may exceed our projections.  I am also pleased by how the new street lights deliver benefits to each neighborhood, to our city as a whole and to our efforts to address climate change. We are making a difference street by street and light by light.”

People can track the progress of the project via an interactive map at http://bit.ly/PDXLED. Green dots show lights that have been installed; red indicates lights that will be converted. The map also allows the public to send in questions and feedback on each street light.

The new LED street lights are easily identifiable: they cast a crisp light similar to moonlight, unlike the yellow-tinged light from high-pressure sodium bulbs. They provide the same coverage to illuminate city streets as the old fixtures while also projecting more light downward to lower light pollution and make it easier for people to star gaze.

Many other cities are making the switch to save both money and energy, including Los Angeles, Boston and Seattle as well asPortland’s nearby neighbors Gresham, Lake Oswego, Hillsboro, Beaverton, Clackamas County and Milwaukie.

The final environmental benefit? The City is recycling the old high pressure sodium fixtures and bulbs. 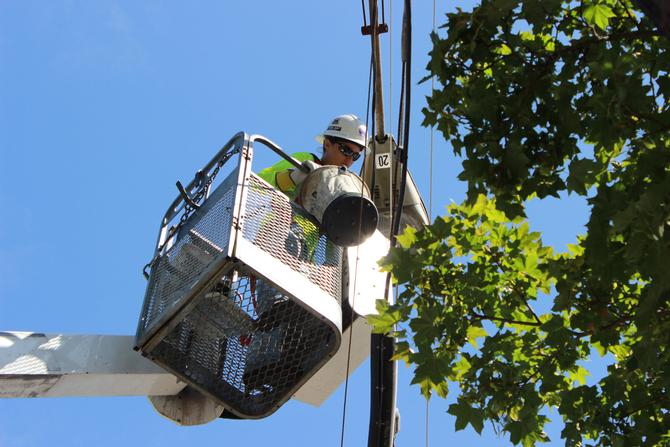