This past Sunday, July 26, the public was invited to Sunday Parkways in the Northeast Portland for an afternoon of fun. Approximately 22,275 participants hit the streets of the Northeast Neighborhood Greenways to make their ways around the 8 mile route, stopping by Woodlawn, Alberta, Fernhill, and Khunamokwst Parks where a collection of fun activities, music, and delicious food awaited them. 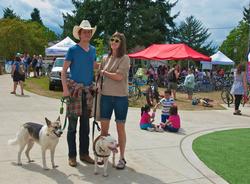 Alberta Park started the day off with an emphasis on physical fitness, as the lively beats of Zumba drew dozens of adults and children to the Parks and Recreation stage to shake it. For those not found at the Zumba stage, they were likely trying their hand at disc golf, boot camp, slack lines, and the climbing wall. Across the street, Kaiser Permanante challenged everyone to celebrate and capture their best healthy with their very own KPHealthie photos. You may even find Smokey the Bear photo joining the fun.

A few steps or pedals away at Woodlawn Park, the music and fun continued, as live music floated from the stage filled with the sounds of swing, children’s laughter, and funk. The eclectic mix brought a crowd that gathered around the Woodlawn stage to dance after munching on their yummy Caribbean, American, and Latin fare.

A Park away at Fernhill, atop pairs of stilts, people became giants as Circus Cascadia challenged adults and children alike to reach new heights. Close by, Metro offered the opportunity to help Portlanders and out-of-towners learn more ways to get around by transit or bike.

This event also showed off a new addition to the Cully area as well as Sunday Parkways – with the introduction of the Khunamokwst Park onto the route – a park which recently opened on April 2015. The park (pronounced KAHN-ah-mockst) is a Chinook word meaning “together,” which perfectly illustrated how children played across the park that included a nature play area, a rain garden, interactive water play area, and skate park. 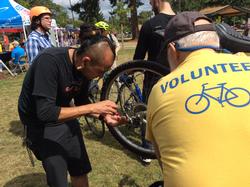 The new park also served as a hub for the Bilingual Bike Fair organized by Andando en Bicicletas en Cully (Riding Bikes in Cully), a neighborhood organization. The group gave out 100 bike helmets to Latino families, lead guided rides, while also holding bilingual workshops on helmet safety and bike maintenance. Overall, even the threat of a little rain (and thunder) could not keep Portland away from enjoying the day.

Thankfully, the Sunday Parkways season is not over. Sunday Parkways opens up the city’s largest public space – its streets – again next month on August 23, 2015. This seven-mile route through Southeast Portland will take participants on a scenic trip through Colonel Summers, Laurelhurst, Ivon, and (newly added to the route) Sewallcrest Parks. To stay up-to-date on the music, vendors, and activities that will be at our August event, follow us on Facebook or https://twitter.com/SundayParkwaysTwitter.